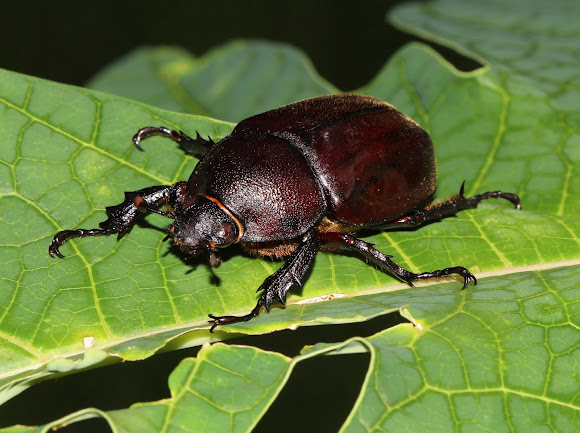 Scarabaeidae; Dynastinae; Xylotrupes gideon philippinensis (female) Herbst, 1790. "Xylotrupes gideon, the brown rhinoceros beetle, is a species of large scarab beetle belonging to the subfamily Dynastinae.... As usual with rhinoceros beetles there is a great difference between the genders. Males are larger than females." Wikipedia. The Wiki article goes on to describe the upper and lower horns, of the male, in some detail, but the female does not have these.

This female Brown Rhinoceros Beetle was spotted on the ground in our front garden. It was crawling around in the grasses and I could not get a clear view for photo. So I picked it up and placed it on the leaf of a nearby papaya plant. After taking some pictures, I returned it to the exact spot where I had found it.

I want to elaborate a little on the habitat narrative above. Sometimes, when I cannot get a decent picture of an insect, I will place it on a white sheet of paper to provide an unobstructed view and I think that is probably alright, but when I placed the above beetle on the papaya leaf, I realized that the resulting picture could be misleading. That is why I felt that I should not just take a picture of the specimen on a leaf and present it here without explanation.