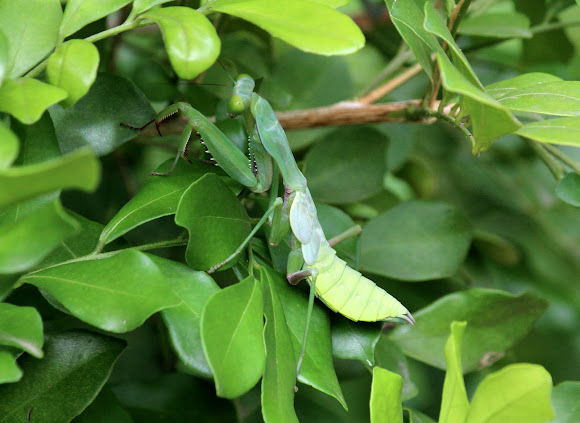 One of the largest insect species we keep here at Melbourne Museum is the Rainforest Mantid (Hierodula majuscula). At around 70mm in length, the adult Rainforest Mantid is not the longest mantid species in Australia, but it is certainly the most buff.Its powerful raptorial forelegs are equipped with razor-sharp spines that allow the mantid to pin and immobilise live prey. A resident of north Queensland rainforests, the adult's solid green colour enables it to all but disappear amongst the foliage. A mantid on the hunt may remain perfectly still for hours, waiting for the right prey to present itself. Looming over its meal and appearing to "pray", the mantid finally strikes with lightning-fast accuracy and shows its true colours as another of nature's perfect predators. An adult mantid is able to prey on not only a large selection of insects, but may also attack small lizards and frogs. After securing the prey with its raptorial forelegs, the mantid devours it alive. These mantids often eat the nuisance parts first, such as an insect's powerful kicking legs. The Rainforest Mantid lives a solitary life and may never come into contact with another of its species after hatching until it is time to breed. Only the mature male of this species is capable of flight, so it is left to him to navigate the precarious expanse of tropical rainforest to find the perfect a female who is ready to mate. In contrast to hunting, night seems to be the preferred time for mating (though it may begin during or continue into daylight hours). As a flying male is quite vulnerable, it is thought that breeding takes place in the dark to reduce the risk of aerial predators. However, there is still one major group of insect predators active at this time – the microbats. To combat this, many mantid species including H. majuscula have evolved a single ear on the lower side of the thorax, capable of picking up the ultrasonic sound frequencies of the microbats' echolocation signals. If the male mantid in flight detects such a signal, he immediately dives and weaves in such a display of evasive manoeuvres that he has been compared to a fighter jet. In the dark, mantid eyes are much less effective. To counter this, a female of the breeding inclination sends out pheromones to attract suitable males. Once the male locates a female, he tempers his approach until the correct moment. He may wait hours within thirty centimetres of her, before rushing her in a mad frenzy and attaching himself to her back with his forelegs. If he is lucky, he will have attached himself a way that prevents her turning around to eat him. If he is unlucky, he may immediately become a meal. Either way, the Rainforest Mantid male can continue to mate even with his head completely missing. It's not all bad news for the male's genes: by becoming an extra meal, he may give his offspring a greater chance of survival by nourishing the female through the month of egg incubation. Rainforest Mantid females may live for up to a year. Though males may be capable of living just as long, their risky lifestyle results in a lower average life span. However, if a male survives mating, he may go on to mate with many more females and live to a ripe old age. - Museum Victoria

Thanks for all your help on the mantids ForestDragon. Much appreciated :)

After doing a bit of research, I think this may be a nymph of Hierodula majuscula, also called the Giant Rainforest Mantis or Australian Giant Mantis. It's an Australian native. It looks like the shape, bulk and coloration is a match.

Most of the information online that I have found is from pet mantis sites, but there are quite a few images if you Google it. Here are a few I found:
http://www.minibeastwildlife.com.au/Care...

Thank you very much bugadrienne! At least we know it's a lady now :)

It is an immature female. That is all I can tell other than she is a beauty. <3

No worries, thanks Jack, I'm not too sure either.

Definitely a type of mantid, but I don't know enough about them to completely ID it down for you :)