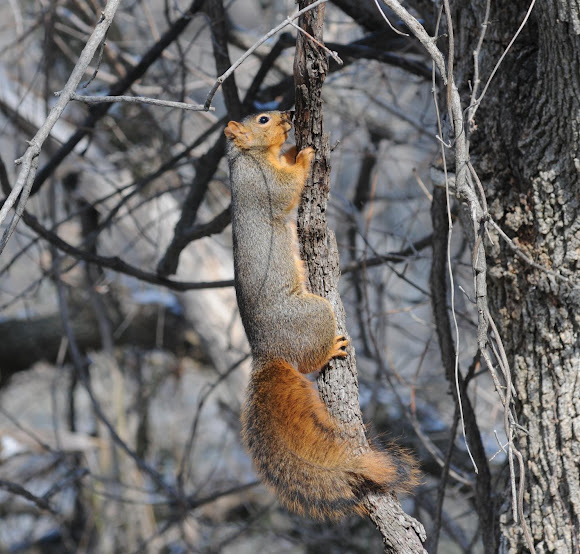 The squirrel's total body length measures 45 to 70 cm (17.7 to 27.6 in), tail length is 20 to 33 cm (7.9 to 13.0 in), and they range in weight from 500 to 1,000 grams (1.1 to 2.2 lb). There is no sexual dimorphism in size or appearance. Individuals tend to be smaller in the west. There are three distinct geographical phases in coloration: in most areas the animals are brown-grey to brown-yellow, while in eastern regions such as the Appalachians there are more strikingly-patterned dark brown and black squirrels with white bands on the face and tail. In the south can be found isolated communities with uniform black coats. To help with climbing, they have sharp claws, developed extensors of digits and flexors of forearms, and abdominal musculature. Fox squirrels have excellent vision and well-developed senses of hearing and smell. They use scent marking to communicate with other fox squirrels. Fox squirrels also have several sets of vibrissae, thick hairs or whiskers that are used as touch receptors to sense the environment. These are found above and below their eyes, on their chin and nose, and on each forearm. (information from Wikipedia)

I saw this robust and vibrantly-colored fox squirrel on a morning hike. I only got one decent photo because as I was shooting, two barred owls called in the distance behind me. As I was distracted by them, the squirrel moved into the shadows.

Lovely! The colors are amazing against the tree trunks!