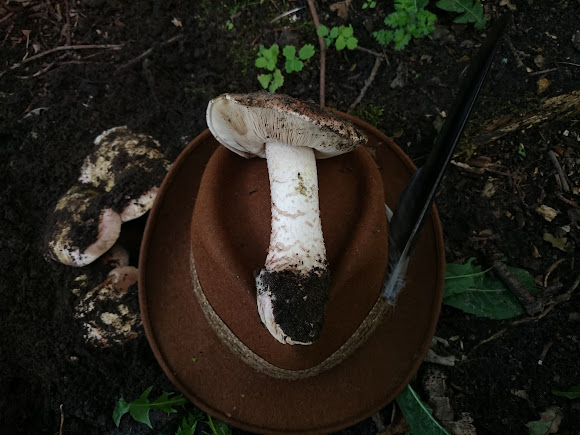 Very easily recognized by its size, although the mushrooms tend to develop largely underground, as seen by the soil that has been brushed off to expose the wine coloured cap. Also the sturdy stipe with vinaceous bands of velum. In Dutch, this mushroom's name translates to 'Magic Button Mushroom', which refers to the immedeate chemical yellow bruising of cap and stipe skin and the trama (flesh). The 'magic' part is seen after a few minutes, when the flesh colour gradually changes to a vinaceous tint. This fairly recently described mushroom (Bas&Heinemann, 1986) is almost exlusively found in the Netherlands where it is a fairly common mushroom, that appears to become more common over the years. In tha past few years the mushroom infrequently appeared in a number of surrounding countries (Great Britain, Belgium, Germany etc) and even in the Israeli desert this mushroom has been found. https://books.google.nl/books?id=YaBiXhg...

Fun fact: it seems to thrive in urban areas. Even found in cellars and storage cells, where it pushes up tiles and even breaks through concrete and asphalt!!!