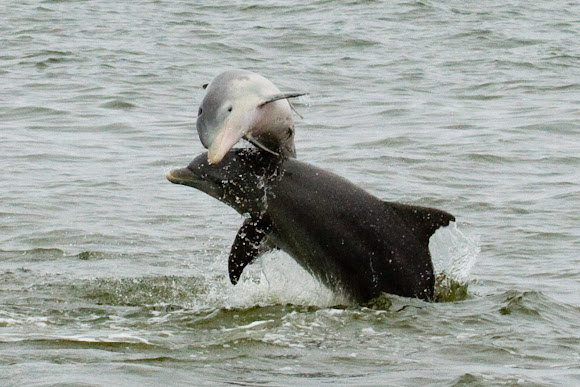 The common bottlenose dolphin is grey in color and may be between 2 and 4 m (6.6 and 13 ft) long, and weigh between 150 and 650 kg (330 and 1,400 lb). Males are generally larger and heavier than females. In most parts of the world the adult's length is between 2.5 and 3.5 m (8.2 and 11 ft) with weight ranges between 200 and 500 kg (440 and 1,100 lb). Newborn calves are between 0.8 and 1.4 m (2 ft 7 in and 4 ft 7 in) long and weigh between 15 and 30 kg (33 and 66 lb). The dolphins have a short and well-defined snout that looks like an old-fashioned gin bottle, which is the source for their common name. Like all whales and dolphins, though, the snout is not a functional nose, which has evolved instead into the blowhole on the top of their heads. Their necks are more flexible than other dolphins' due to five of their seven vertebrae not being fused together as is seen in other dolphin species.

Pod of dolphins playing in the waters off Sanibel Island, Florida. This juvenile dolphin was leaping over the adult, who was also leaping!

I have only seen this once where I lived where the babies were jumping. It is so endearing to watch. I love these photos and descriptions!

thats awesome picture. pretty cool how the dophin is over the other dolphin also cute picture too.

Hi Donna! I would like to share with you a very educational and enjoyable book by Dr Denise L Herzing, "Dolphin Diaries", published 2011. She spent her life studying dolphins and I know you would enjoy her book.

Congratulations on such a beautiful series and National Geographic Spotting of the Week!

What a wonderful, tender moment you captured! I have been showing this to everyone! LOVE it! Congrats!

Beautiful capture Donna,congrats on the National Geographic Spotting of the Week.Thanks for sharing

What an honor Donna! Congratulations on this recognition by National Geographic. WOW! Great series.

Congratulations Donna it is a fantastic series!! =)

Congratulations Donna!
A young bottlenose dolphin jumps over an adult in our National Geographic Spotting of the Week.

and 96 other people favorited this spotting