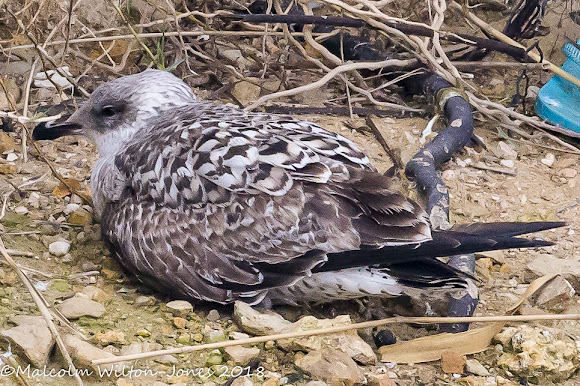 Many Gulls can be difficult to pin down to a specific species, especially the members of what has become known as the Herring Gull complex which includes several large Gull species and the Lesser Black-backed Gull, which itself has several subspecies. Where ranges overlap and all the different species gather together the wings and mantles can very from pale grey to dark black and anywhere in between. Some races of Lesser Black-backed Gull can be paler than dark races of the other species. Lighting does not always help either, in bright lighting many gulls appear paler and in poor lighting they can look darker. In Autumn most large Gulls which have white heads in summer develop mottled head patterns but not all. Two of the 3 races of Yellow-legged Gull retain white head while the third has a mottled cap. The area round the mouth of the Mediterranean and the adjacent Atlantic holds the wintering areas of several sub-species of Yellow-legged Gull and Lesser Black-backed Gull plus all the variations of juveniles and immatures, plus other species of similar sized Gull including Caspians and Audouin's. All those with mottled heads are likely to be Lesser-Black-backed but in October, when these pictures were take, some were still in summer plumage and these are diffucult to separate from some Yellow-legged Gulls without good views of the Primary feathers.