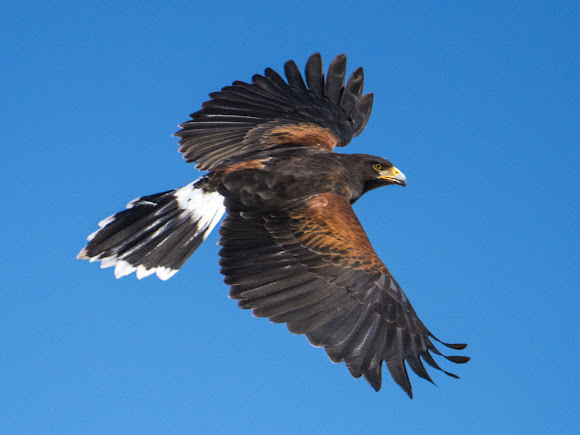 This hawk is generally dark brown all over with white bands on its upper and lower tail. It has yellow legs, and beak, as pictured.

Harris’s hawks live in arid areas in the southwest…mainly Arizona and Texas. This hawk was spotted northeast of Tucson, AZ in the foothills of the Santa Catalina Mountains. There was a nest close to the spotting, and we were told by the locals that there were at least 3 hawks tending the nest at this time of year.

Harris’s hawks are very unique in that they nest and hunt cooperatively for prey. They are very social. For example…a group will help each other while hunting. If prey attempts to hide in a bush, some members of the hawk group will wade into the bush to flush out the prey, allowing another member to snag it. Once the prey is caught, it is shared amongst members of the group. Electrocution from power lines is a danger to Harris’s hawks. If one is injured, others will stay with it, and bring food to keep it alive, according to online sources. Very unique birds.

Thanks guys...I was hoping to get a cooperative group shot, as described above, but these raptors are pretty shy. I will keep trying.

Only just picked up on this Jim. Great flight shots as always, that first one is an absolute stunner! Great write up too.

Many thanks, Leuba and Maplemoth!

Daniele...thanks for the SOTD nomination!

Thanks also to Antonio, outsidegirl and maplemoth for your comments.

awesome series Jim,congrats on the well deserved SOTD and thanks for sharing

Congrats on fabulous and well-deserved SOTD!! :)

Congratulations Jim, your Harris's Hawk is our Spotting of the Day:

"This spectacular Harris's Hawk (Parabuteo unicinctus) caught in flight is our Spotting of the Day! This medium-large bird of prey breeds from the southwestern United States down to Chile. Unlike most raptors which hunt in a solitary fashion, Harris's Hawk is known for its cooperative hunting in packs".