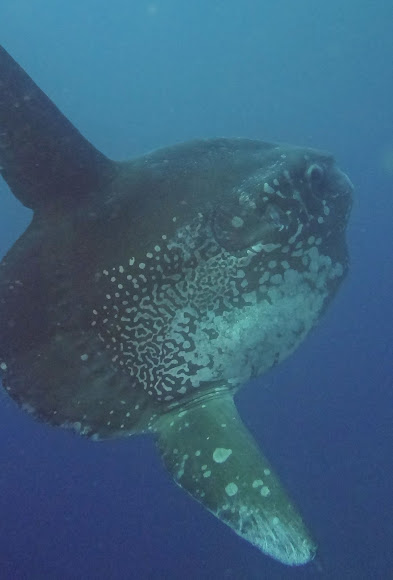 The ocean sunfish, Mola mola, or common mola, is the heaviest known bony fish in the world. It has an average adult weight of 1,000 kg (2,200 lb). The species is native to tropical and temperate waters around the globe. It resembles a fish head with a tail, and its main body is flattened laterally. Sunfish can be as tall as they are long when their dorsal and ventral fins are extended. Sunfish live on a diet that consists mainly of jellyfish, but because this diet is nutritionally poor, they consume large amounts in order to develop and maintain their great bulk. Females of the species can produce more eggs than any other known vertebrate. Sunfish fry resemble miniature pufferfish, with large pectoral fins, a tail fin and body spines uncharacteristic of adult sunfish. Adult sunfish are vulnerable to few natural predators, but sea lions, orcas and sharks will consume them. A member of the order Tetraodontiformes, which also includes pufferfish, porcupinefish and filefish, the sunfish shares many traits common to members of this order. It was originally classified as Tetraodon mola under the pufferfish genus, but it has since been given its own genus, Mola, with two species under it. The ocean sunfish, Mola mola, is the type species of the genus

Ocean sunfish are native to the temperate and tropical waters of every ocean in the world. Mola genotypes appear to vary widely between the Atlantic and Pacific, but genetic differences between individuals in the Northern and Southern hemispheres are minimal. Although early research suggested sunfish moved around mainly by drifting with ocean currents, individuals have been recorded swimming 26 km in a day, at a top speed of 3.2 km/h. Sunfish are pelagic and swim at depths to 600 m (2,000 ft). Contrary to the perception that sunfish spend much of their time basking at the surface, M. mola adults actually spend a large portion of their lives submerged at depths greater than 200 m (660 ft), occupying both the epipelagic and mesopelagic zones. Sunfish are most often found in water warmer than 10 °C (50 °F); prolonged periods spent in water at temperatures of 12 °C (54 °F) or lower can lead to disorientation and eventual death. Surface basking behavior, in which a sunfish swims on its side, presenting its largest profile to the sun, may be a method of "thermally recharging" following dives into deeper, colder water. Others point to sightings of the fish in colder waters outside of its usual habitat, such as those southwest of England, as evidence of increasing marine temperatures. Sunfish are usually found alone, but occasionally in pairs or in large groups while being cleaned. They swim primarily in open waters, but are sometimes seen near kelp beds, taking advantage of resident populations of smaller fish which remove ectoparasites from their skin. Because sunfish must consume a large volume of prey, their presence in a given area may be used as an indicator of nutrient-rich waters where endangered species may be found.

This was a surprise sighting in Lombok Island, Indonesia when the water temperature got lower to 23C. This sighting was the first time for 2 of the guides as Mola-Mola is not commonly known to be seen in Lombok.