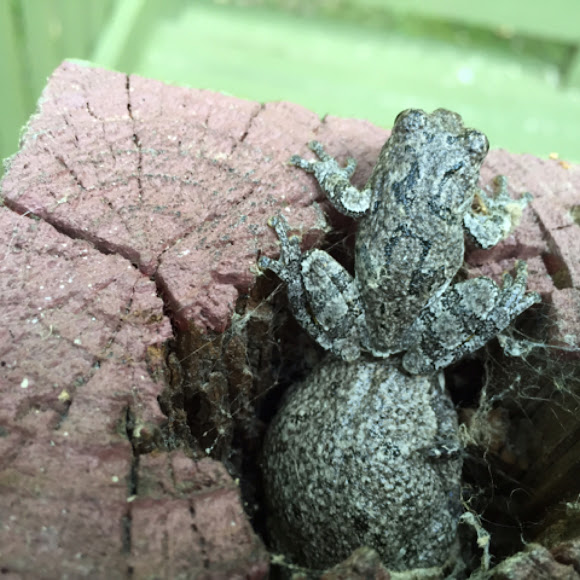 The average size of Eastern Gray Treefrogs is between 1 1/4 to 2 3/8 inches (3.18-5.22 cm). Eastern Gray Treefrogs have very warty, rough skin and rather large toe pads that are very sticky because of the slimy mucus they produce. They range in color from greenish or brownish to grey and adults have several large, dark blotches on their backs. Also, there is often a dark-edged light spot under their eyes. Eastern Gray Treefrogs also have a bright yellow or orange coloring on the inside of their thighs that they can flash at predators to confuse them when they are under atack. Male and female treefrogs look the same except that the underside of the males' chins is much darker. This is because they have sacs in their throats for calling during mating season and females do not.

Because Eastern Gray Treefrogs need temporary pools or permanent water for breeding, they live in forested areas that are in or near permanent water. During the summer months they tend to live in moist areas in hollow trees or rotted logs. In winter they hibernate under tree roots and leaves.