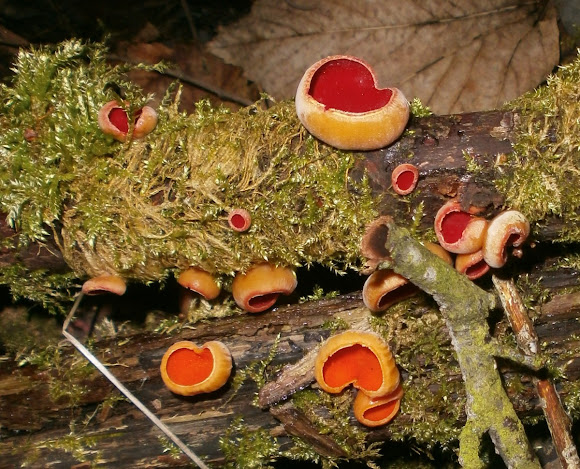 According to the experts on wildaboutbritain.co.uk you need a microscope to differentiate between scarlet elfcup species: http://www.wildaboutbritain.co.uk/forums... also he mentions how to germinate the spores on damp paper towel. The orange ones could be a colour morph or could be another species of scarlet elfcup, again I'd need to use a microscope to determine that according to experts. Maybe growing on elder? My friend thought they were growing on Alder, I think Hazel is also a possibility particularly after reading the scarlet elfcup wikipedia 'ecology and habitat' section. They tasted great fried for a couple of minutes for breakfast (enough mushrooms for 3 meals!), my sister suggested they taste like shop bought button mushrooms. The same as this spotting: http://www.projectnoah.org/spottings/167... I went back and collected some to try as a dye.

thanks Deepti S for the kind words!

thanks for the comment lhalleckson, they really do stand out in winter because they're so brightly coloured!

Such a great spotting. And, looks like a lovely dinner, too!

rat.tumour aka lipase 9 years ago

Great spotting Rat.tumour aka lipase,direct from nature to the plate :-)
Congrats and thanks for sharing