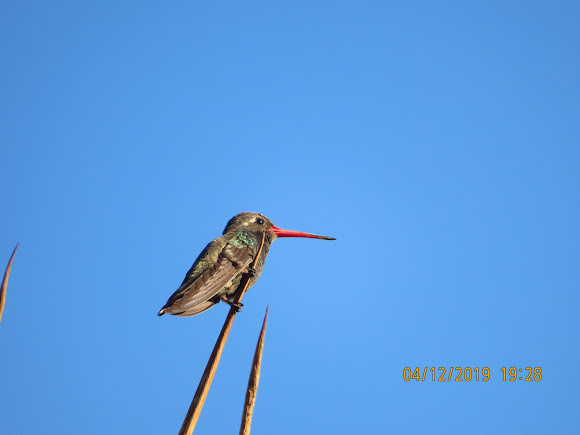 Teeny-tiny bundle of iridescent green feathers and an out of all proportion inordinately long, reddish coloured beak with a black tip. This species can be distinguished by its straight, bright red bill with a black tip.

Hotel grounds in Guadalajara, Mexico. It vibrated its body as it sang...never seen anything like this before. Well, never seen a Hummingbird before. We do not have them in India. As a kid I thought the Purple sunbird was a hummingbird because it could hover!

These photos were taken on my last day in the Hotel...I would go back in a jiffy...just 4 plane rides away ( so may be just wishful thinking.) . It made me so happy to get a usable shot. Had seen this species earlier but was so excited that all I had managed were blurry shots.

I think it might be something called a blue-throated goldentail female. https://ebird.org/species/bltgol1