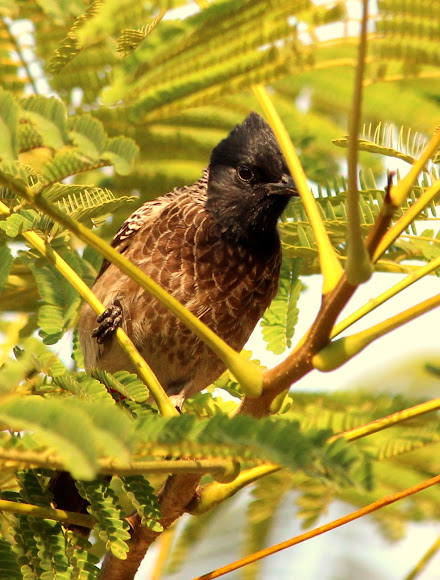 The Red-vented Bulbul is a member of the bulbul family of passerines. It is resident breeder across the Indian Subcontinent, including Sri Lanka extending east to Burma and parts of Tibet. It has been introduced in many other parts of the world and has established itself in the wild on several Pacific islands including Fiji, Samoa, Tonga, and Hawaii. It has also established itself in parts of Dubai, the United Arab Emirates and New Zealand. It is included in the list of the The Red-vented Bulbul is easily identified by its short crest giving the head a squarish appearance. The body is dark brown with a scaly pattern while the head is darker or black. The rump is white while the vent is red. The black tail is tipped in white. The Himalayan races have a more prominent crest and are more streaked on the underside. The Race intermedius of the Western Himalayas has a black hood extending to the mid-breast. Population bengalensis of Central and Eastern Himalayas and the Gangetic plain has a dark hood, lacks the scale like pattern on the underside and instead has dark streaks on the paler lower belly. Race stanfordi of the South Assam hills is similar to intermedius. The desert race humayuni has a paler brown mantle. The nominate race cafer is found in Peninsular India. Northeast Indian race wetmorei is between cafer, humayuni and bengalensis. about 20 cm in length, with a long tail. Sri Lankan race haemorrhous (=haemorrhousus) has a dark mantle with narrow pale edges. Race humayuni is known to hybridize with Pycnonotus leucogenys and these hybrids were once described as a subspecies magrathi marked by their pale rumps and yellow-orange or pink vents.In eastern Myanmar there is some natural hybridization with Pycnonotus aurigaster.

This is a bird of dry scrub, open forest, plains and cultivated lands. In its native range it is rarely found in mature forests. A study based on 54 localities in India concluded that vegetation is the single most important factor that determines the distribution of the species. It has been introduced into Hawaii, Fiji and New Zealand. They were introduced to Samoa in 1943 and became common on Upolu by 1957. Red-vented Bulbuls were introduced to Fiji around 1903 by indentured labourers from India. They established on the Tongan islands of Tongatapu and Niuafo'ou. They were introduced into Melbourne around 1917 but were not seen after 1942. They established in Auckland in the 1950s but were exterminated. They prefer the dry lowland regions in these introduced regions. They are considered as pests because of their habit of damaging fruit crops. Methiocarb and ziram have been used to protect cultivated Dendrobium orchids in Hawaii from damage by these birds. These birds learn to avoid the repellent chemicals. They can also disperse the seeds of invasive plants like Lantana camara and Miconia calvescens.