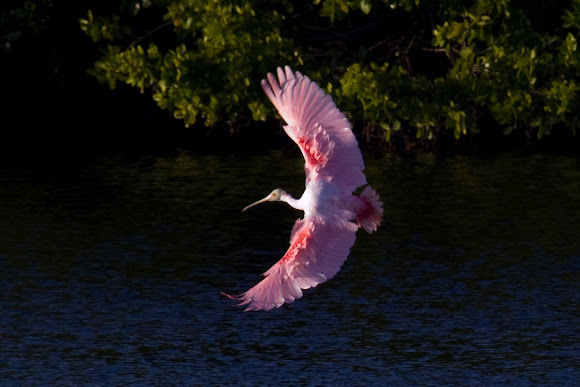 The Roseate Spoonbill (Platalea ajaja) (sometimes placed in its own genus Ajaja) is a gregarious wading bird of the ibis and spoonbill family, Threskiornithidae. It is a resident breeder in South America mostly east of the Andes, and in coastal regions of the Caribbean, Central America, Mexico, and the Gulf Coast of the United States. The Roseate Spoonbill is 71–86 cm (28–34 in) long, with a 120–133 cm (47–52 in) wingspan and a body mass of 1.2–1.8 kg (2.6–4.0 lb). The tarsus measures 9.7–12.4 cm (3.8–4.9 in), the culmen measures 14.5–18 cm (5.7–7.1 in) and the wing measures 32.3–37.5 cm (12.7–14.8 in) and thus the legs, bill, neck and spatulate bill all appear elongated. Adults have a bare greenish head ("golden buff" when breeding) and a white neck, back, and breast (with a tuft of pink feathers in the center when breeding), and are otherwise a deep pink. The bill is grey. There is no significant sexual dimorphism. Like the American Flamingo, their pink color is diet-derived, consisting of the carotenoid pigment canthaxanthin. Another carotenoid, astaxanthin, can also be found deposited in flight and body feathers. The colors can range from pale pink to bright magenta, depending on age and location. Unlike herons, spoonbills fly with their necks outstretched. They alternate groups of stiff, shallow wingbeats with glides.

This species feeds in shallow fresh or coastal waters by swinging its bill from side to side as it steadily walks through the water, often in groups. The spoon-shaped bill allows it to sift easily through mud. It feeds on crustaceans, aquatic insects, frogs, newts and very small fish ignored by larger waders. In the United States a popular place to observe Roseate Spoonbills is "Ding" Darling National Wildlife Refuge in Florida. Roseate Spoonbills must compete for food with Snowy Egrets, Great Egrets, Tricolored Herons, and American White Pelicans