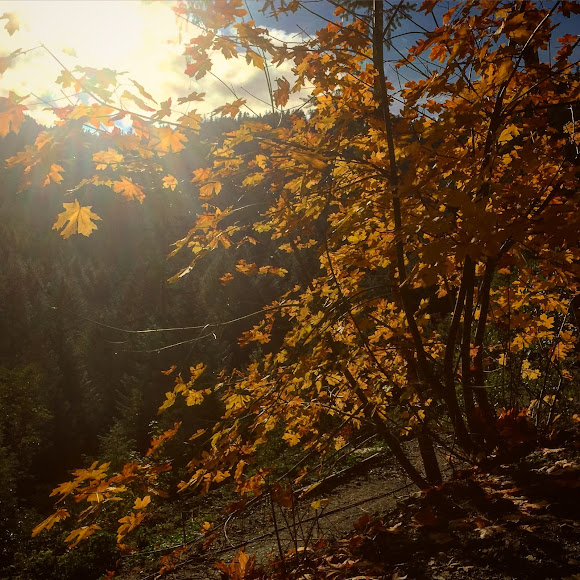 It has the largest leaves of any maple, typically 15–30 cm (5.9–11.8 in) across, with five deeply incised palmate lobes, with the largest running to 61 centimetres (24 in).[9][10] In the fall, the leaves turn to gold and yellow, often to spectacular effect against the backdrop of evergreen conifers. The flowers are produced in spring in pendulous racemes 10–15 cm (4–6 in) long, greenish-yellow with inconspicuous petals. The fruit is a paired winged samara, each seed 1–1.5 centimetres (3⁄8–5⁄8 in) in diameter with a 4–5-centimetre (1 5⁄8–2-inch) wing.[6][10][9] In the more humid parts of its range, as in the Olympic National Park, its bark is covered with epiphytic moss and fern species.

Bigleaf maple can form pure stands on moist soils in proximity to streams, but are generally found within riparian hardwood forests or dispersed, (under or within), relatively open canopies of conifers, mixed evergreens, or oaks (Quercus spp.)[11][7] In cool and moist temperate mixed woods they are one of the dominant species.[12] It is very rare north of Vancouver Island though cultivated in Prince Rupert,[13] near Ketchikan and in Juneau.[14]

Bigleaf maple has been used for creating syrup but it is not common. This is because Sugar Maple has a higher sugar content. Nevertheless, syrup production has become a localized industry in bigleaf maple groves where weather conditions (including sub-freezing winters) are especially suitable, such as near sea-level in British Columbia and at higher elevations along the West Coast from Washington through Northern California.[citation needed]