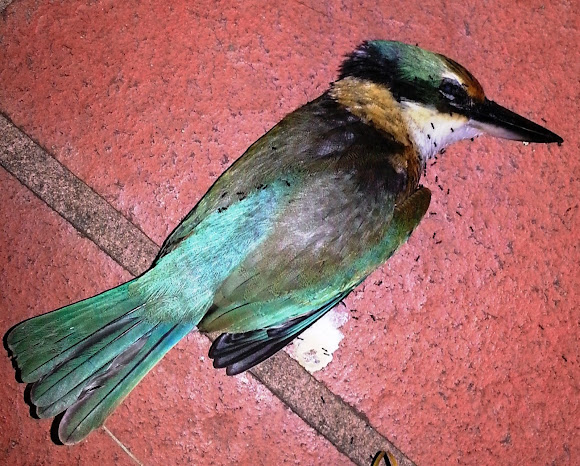 The Sacred Kingfisher is a medium sized kingfisher. It has a turquoise back, turquoise blue rump and tail, buff-white underparts and a broad cream collar. There is a broad black eye stripe extending from bill to nape of neck. Both sexes are similar, although the female is generally lighter with duller upper parts. Young birds are similar to the female, but have varying amounts of rusty-brown edging to feathers on the collar and underparts, and buff edges on the wing coverts.

I had seen this guy for a few days catching insects outside the house but unfortunately he collided with the window one evening and died shortly afterward.

Oh no, poor thing! He was beautiful! (I'd be traumatised if that happened to me, I reckon!)

Thanks for taking the time to find that for me Daniele! Very much appreciated :) It was at my cousins farm so i'll have to print this list out for them to avoid losing anymore.

Alice, here are some tricks from www.birdsinbackyards.net. Maybe a few bird stickers spread on the window surface will help?

"How can I stop birds attacking my windows?

Generally birds attack their reflection in a window during their breeding season. They are seeing another bird encroaching on their territory and they want it gone! In some cases the behaviour can get very extreme, with the bird attacking the reflection for most of the day. Not only can it drive you crazy, but when it becomes obsessive, it is bad for the birds too.

In most instances, the birds will simply do it a couple of times and move on, but if it is persistent then you need to remove the trigger for the behaviour – the reflection. You can try:

I think i've heard that too but unfortunately the windowed area is very large. Just have to hope it doesn't happen again

Thanks for your help IDing him Daniele!

Hi Alice! My Simpson and Day field guide shows the juvenile sacred kingfisher not with a full white collar but with yellow/brown on the nape. I you saw the breast it would have been a scalloped brown and buff. Hope this helps!