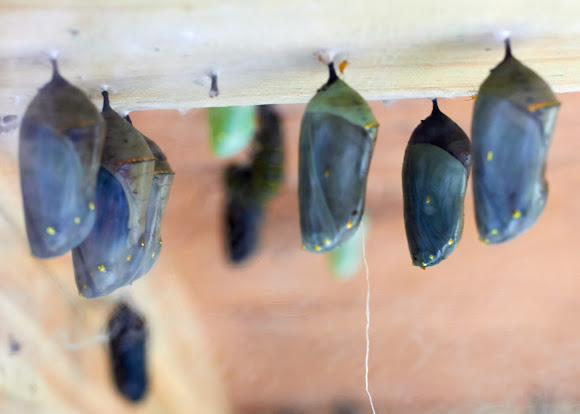 The monarch’s wingspan ranges from 8.9–10.2 cm (3½–4 in). The upper side of the wings is tawny-orange, the veins and margins are black, and in the margins are two series of small white spots. The fore wings also have a few orange spots near the tip. The underside is similar, but the tip of the fore wing and hind wing are yellow-brown instead of tawny-orange and the white spots are larger. The male has a black patch of androconial scales on either hind wing (in some butterflies, these patches disperse pheromones, but are not known to do so in monarchs), and the black veins on its wing are narrower than the female’s. The male is also slightly larger. A color variation has been observed in Australia, New Zealand, Indonesia and the United States as early as the late 19th century. Named nivosus by lepidopterists, it is grayish-white in all areas of the wings that are normally orange. Generally, it is only about 1% or less of all monarchs, but has maintained populations as high as 10% on Oahu in Hawaii, possibly due to selective predation. Like all insects, the monarch has six legs, but uses the four hindlegs as it carries its two front legs against its body. The eggs are creamy white and later turn pale yellow. They are elongated and subconical, with about 23 longitudinal ridges and many fine traverse lines. A single egg weighs about 0.46 mg (0.0071 gr), and measures about 1.2 mm (47 mils) high and 0.9 mm (35 mils) wide. The caterpillar is banded with yellow, black, and white stripes. The head is also striped with yellow and black. Two pairs of black filaments are seen, one pair on each end of the body. The caterpillar will reach a length of 5 cm (2 in). The chrysalis is blue-green with a band of black and gold on the end of the abdomen. Other gold spots occur on the thorax, the wing bases, and the eyes.

The monarch can be found in a wide range of habitats, such as fields, meadows, prairie remnants, urban and suburban parks, gardens, trees, and roadsides. It overwinters in conifer groves. These Chrysalis were near a butterfly garden at Tampa's Manatee Viewing Center.

The monarch butterfly (Danaus plexippus) is a milkweed butterfly (subfamily Danainae), in the family Nymphalidae. It is perhaps the best known of all North American butterflies. Since the 19th century, it has been found in New Zealand, and in Australia since 1871, where it is called the wanderer.

These Chrysalis were near a butterfly garden at Tampa's Manatee Viewing Center.

Hi BeardedSteven, nice information about this spotting. The habitat says where this species can be found but what habitat was THIS spotting in? The large group is interesting.