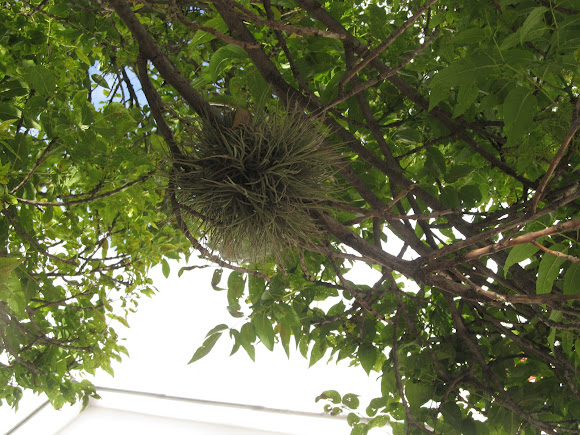 Although this appears to be a parasitic plant it is not (see Notes). I am including pictures of two, one growing on a smaller branch and another attached directly to the trunk. I have also included a picture of the tree, although I have no idea what it is. The plants seem to form a ball about 15 centimeters across and are light green, almost blue-green in color.

These were found growing on a tree planted along a street in downtown Quito, Ecuador, elevation 2,850 meters, so while it may be a native Ecuadorian tree, it was planted there for decorative purposes. Ball Moss is found from Southern United States to Norther Chile & Argentina.

Post ID notes: Also called Mexican Air Plants and Pelo de Angel (Angel's hair), these plants, commonly called Ball "Moss" are not moss but in the Bromeliaceae family. It is not a parasitic plant but an epiphyte, an "air plant" that derives its needs from the air and not it's host plant. It has been seen thriving on power lines.

Thanks Brian. You nailed it. I really appreciate it. Checking out your suggestion I've learned a lot of these type plants. Thanks again.

Thanks Brian. On my way to the Dr. Will check it out when I return.