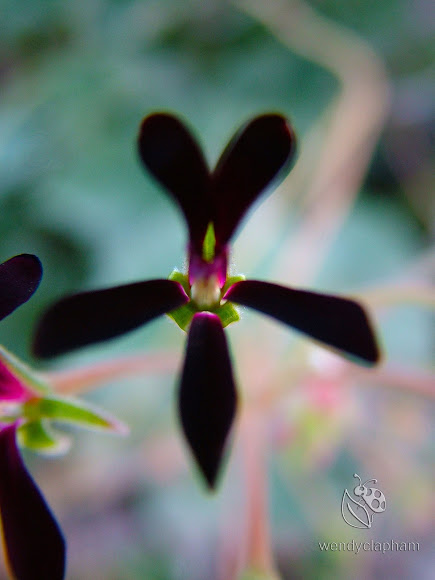 Pelargonium sidoides forms a rosette-like plant with crowded leaves. It is very similar to some forms of P. reniforme, but is easily distinguished by its blackish, rather than pink petals. The long-stalked leaves are mildly aromatic, heart-shaped and velvety. The distinctive dark, reddish-purple (almost black) flowers are present almost throughout the year, but occur mostly from late spring to summer (October - January) with a peak in midsummer (December). The genus name Pelargonium is derived from the Greek word Pelargos which means stork. This refers to the rostrum of the schizocarp (seed capsule) which resembles the bill of a stork. The species name sidoides reflects the resemblance of the foliage to that of a European plant, Sida rhombifolia.

Pelargonium sidoides has a wide distribution. It occurs throughout the eastern Cape, Lesotho, Free State and southern and south-western Gauteng in the Republic of South Africa. It usually grows in short grassland and sometimes with occasional shrubs and trees on stony soil varying from sand to clay-loam, shale or basalt. P. sidoides is found at altitudes ranging from near sea level to 2300m in Lesotho. It is found in areas which receive rainfall in summer (November to March) varying from 200 - 800mm per annum.

P. sidoides and P. reniforme are marketed as Umckaloaba or Zucol for bronchitis and pharyngitis. The plant species has also been investigated for use in treating gastritis. * subject in cultivation