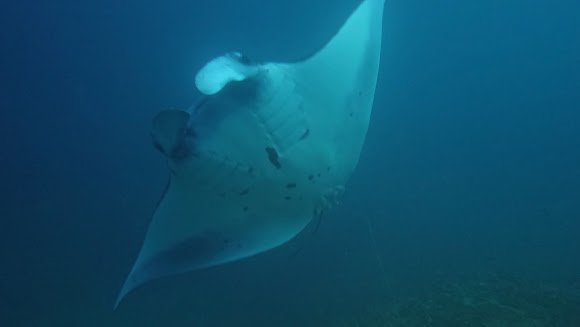 The reef manta ray (Manta alfredi) is species of ray in the family Mobulidae, one of the largest rays in the world. Among generally recognized species, it is the second-largest species of ray, only surpassed by the giant oceanic manta ray (a currently unrecognized species from the Caribbean region also appears to be larger than the reef manta ray). Its scientific name is a tribute to the British Prince Alfred, Duke of Saxe-Coburg and Gotha , who was victim of an assassination attempt in Clondarf in Australia at the time the description of the species was published by the director of the Australian Museum Gerard Krefft in 1868. Reef manta rays are typically 3 to 3.5 m (9.8 to 11.5 ft) in disc width, with a maximum size of about 5.5 m (18 ft). Long included in M. birostris, the status of the reef manta ray as a separate species was only confirmed in 2009.

The reef manta ray is found widely in the tropical and subtropical Indo-Pacific, but with a few records from the tropical East Atlantic and none from the West Atlantic or East Pacific. Compared to the giant oceanic manta ray, the reef manta ray tends to be found in shallower, more coastal habitats, but local migrations are sometimes reported. Manta birostris is similar in appearance to Manta alfredi and the two species may be confused as their distribution overlaps. However there are distinguishing features.