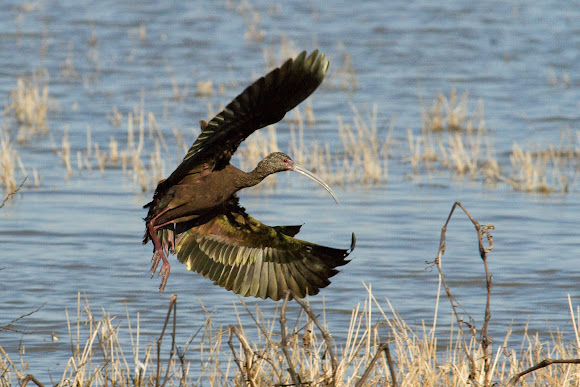 This species breeds colonially in marshes, usually nesting in bushes or low trees. Its breeding range extends from the western USA south through Mexico, as well as from southeastern Brazil and southeastern Bolivia south to central Argentina, and along the coast of central Chile. Its winter range extends from southern California and Louisiana south to include the rest of its breeding range. It is very similar to the Glossy Ibis in its non-breeding plumages, but the plumage color is somewhat warmer and breeding adults have a pink face bordered with white, a grey bill, and redder legs. Adults have red eyes year-round, whereas Glossy Ibises have dark eyes. Juveniles of the two species are nearly identical.

Good question NatraList. White-faced Ibis is very difficult to tell apart from Glossy Ibis in winter, but the ranges of the two species barely overlap. In California, we have the White-faced Ibis, which will get the white outline on its face in breeding season.