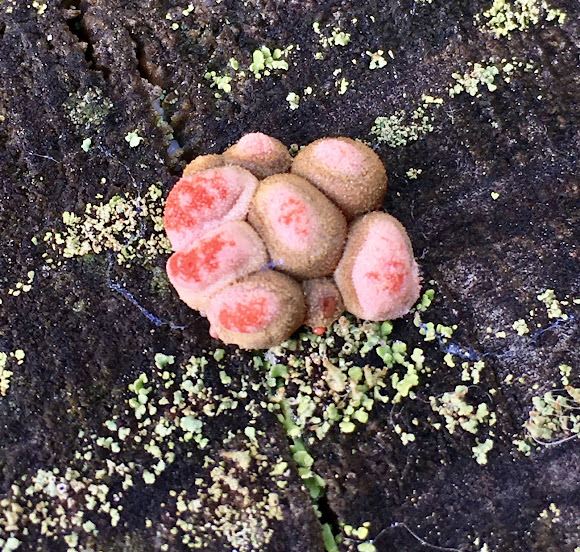 Tiny cluster of pink topped fuzzy fungi "balls" Lycogala epidendrum, commonly known as wolf's milk, groening's slime is a cosmopolitan species of myxogastrid amoeba which is often mistaken for a fungus. The aethalia, or fruiting bodies, occur either scattered or in groups on damp rotten wood, especially on large logs, from June to November. These aethalia are small, pink to brown cushion-like globs. They may excrete a pink paste if the outer wall is broken before maturity. When mature, the colour tends to become more brownish. When not fruiting, single celled individuals move about as very small, red amoeba-like organisms called plasmodia, masses of protoplasm that engulf bacteria, fungal and plant spores, protozoa, and particles of non-living organic matter through phagocytosis (see slime mould for more information).

Growing on top of a pine tree stump

Congratulations, Sarah, on your much-deserved SOTD.

This is very interesting - thank you for sharing!

Congratulation Sarah, your Wolf's Milk is our Spotting of the Day! Thanks to Christine and Neil for help with ID and a lively discussion.

"Our pink and fuzzy Spotting of the Day is often mistaken for a fungus! With a cosmopolitan distribution and commonly known as Wolf's Milk or Groening's Slime, Lycogala epidendrum is a true slime mold (Myxogastria or Myxomycetes depending on the nomenclature), characterized by a plasmodial stage ("naked" masses without cell walls) and a fruiting bodies stage as seen here. Slime molds were formerly classified as Fungi, but are no longer considered part of that kingdom".

Thank you, Christine!! I am sure your kids love them.....because I was tickled whenever I broke them opened and saw the "prize" inside!!!
Wait tho'....I am just a big kid, myself!! LOL
;)

Indeed a cool spotting. My kids love finding these when they are mature because they have fun poking them and ejecting the spores.

Excellent, Sarah. It's a great spotting. Fungus is always full of the best surprises. Great to see the photo update. Some of my favourite spottings are those that have evolved over time, be it a day, week, or year/s.

Yes! That's the spore mass. It turns a lavender/pinkish color.

Hey Christine & Neil....
I checked on these lil guys today & they DID turn brown & when I scraped the top off of one - there was an amazing peach colored powder inside!
I included a photo!
:)

Thank you, Christine & Neil!! I will look it up & make some edits!!

I agree, Christine. From your suggestion, I found this link. http://www.messiah.edu/Oakes/fungi_on_wo... They look very similar.

Might be Lycogala epidendrum. It’s a slime mold that starts out pink and fuzzy, but turns brown with age.