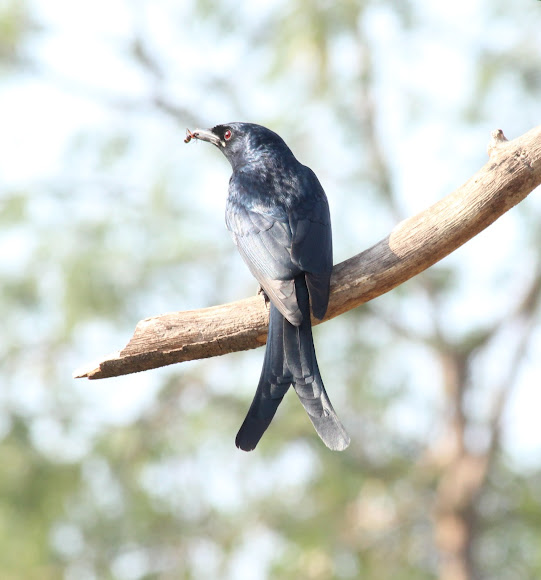 The Black Drongo is a small Asian passerine bird of the drongo family Dicruridae. It is a common resident breeder in much of tropical southern Asia from southwest Iran through India and Sri Lanka east to southern China and Indonesia. It is a wholly black bird with a distinctive forked tail and measures 28 cm (11 in) in length. Feeding on insects, it is common in open agricultural areas and light forest throughout its range, perching conspicuously on a bare perch or along power or telephone lines. The species is known for its aggressive behavior towards much larger birds, such as crows, never hesitating to dive-bomb any birds of prey that invades its territory. This behavior earns it the informal name of King Crow. Smaller birds often nest in the well-guarded vicinity of a nesting Black Drongo. Previously considered a subspecies (Dicrurus adsimilis macrocercus) of the African Fork-tailed Drongo (Dicrurus adsimilis), it is now recognized as a full species. The Black Drongo has been introduced to some Pacific islands, where it has thrived and become abundant to the point of threatening and causing the extinction of native and endemic bird species there.

The Black Drongo is found predominantly in open country and usually perches and hunts close to the ground. They are mostly aerial predators of insects but also glean from the ground or off vegetation. They are found as summer visitors to northeastern Afghanistan and northern Pakistan but are residents from the Indus Valley until Bangladesh and into India and Sri Lanka. Some populations show seasonal movements that are poorly understood. The Black Drongo can be found in savannas, fields, and urban habitats. Black Drongos were introduced just before the Second World War from Taiwan to the island of Rota to help in the control of insects. It is believed that they dispersed over the sea to the island of Guam in the 1950s. By 1967, they were the fourth most commonly seen birds in roadside counts on Guam and are today the most abundant bird there Predation by and competition from Black Drongos have been suggested as factors in the decline of endemic bird species such as the Rota Bridled White-eye and the Guam Flycatcher.

Being common, they have a wide range of local names. The older genus name of Buchanga was derived from the Hindi name of Bhujanga. Other local names include Thampal in Pakistan, Gohalo/Kolaho in Baluchistan, Kalkalachi in Sindhi, Kotwal (=policeman) in Hindi; Finga in Bengali; Phenchu in Assamese: Phenchu; Cheiroi in Manipuri; Kosita/ Kalo koshi in Gujarati; Ghosia in Marathi; Kajalapati in Oriya; Kari kuruvi (=charcoal bird), Erettai valan (=two tail) in Tamil; Passala poli gadu in Telugu; Kaaka tampuratti (=queen of crows) in Malayalam; Kari bhujanga in Kannada and Kauda in Sinhalese. A superstition in central India is that cattle would lose their horn if a newly fledged bird alighted on it.It is held in reverence in parts of Punjab in the belief that it brought water to Husayn ibn Ali, revered by Shī‘a Muslims.