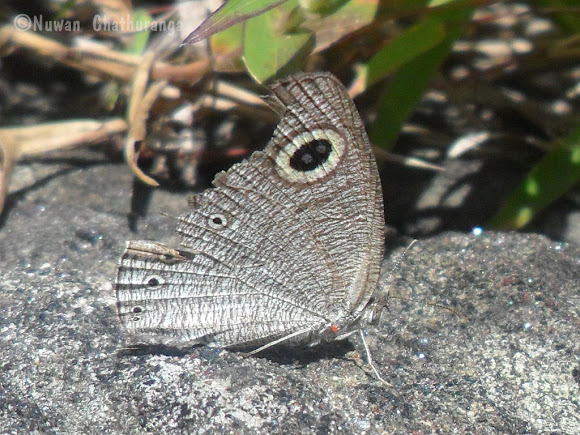 A lively little joyful butterfly that flies all day long among the short grass and herbs in its habitat in large groups. Its flight is weak and can be considered as a short skip or a bounce closer to the ground. It moves forward in a zigzag manner with a few crisp wing beats, often settling at regular intervals to rest nectar. It is very fondness for walking along surfaces of large leaves, illuminating dark areas of the jungle with its bright white hind wings. If disturbed, it goes immediately to ground, trying to hide in low shrubs or thick grass within security but it does not remain very long. It is one of the first butterflies to come out in the morning, even in damp conditions and has a tendency to bask in the early morning with its wings partly open. In the evening, it moves into a nearby thicket to spend the night, where it will rest on a low leaf or twig with its wings over its back.

This is a much more local butterfly than the White Four-ring and is confined to the hill tracts of the eastern part of the island, with some local populations around Galaha near Kandy in the central hills. Hence it is less common. It is essentially restricted to grasslands in Uva district between the elevations of 500 to 5000 feet. It is a butterfly of the dry patanas and grasslands and is rarely seen outside this habitat.

it is confined to Sri Lanka.

Thank you brandon and J !
it could be a parasite, unfortunately i don't have any close ups!

Tremendous spotting! Is that a parasite on its abdomen?