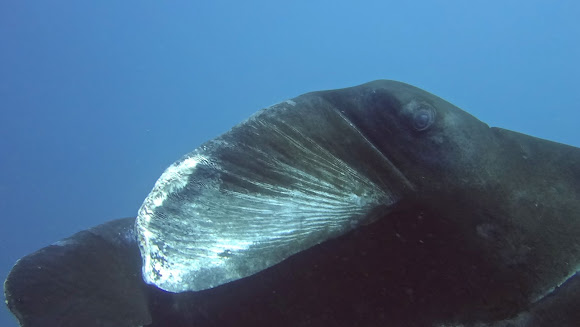 The is the Black version, Melanistic version of Reef Manta Ray, Manta alfredi. They are considered a rarity, aside from another rarer version, the White Manta, Leucistic mantas, which are white or almost all white in colour including their back. This individual was rather huge, easily 4 meters, possibly up to 4.5 meters wing span.

The reef manta ray is found widely in the tropical and subtropical Indo-Pacific, but with a few records from the tropical East Atlantic and none from the West Atlantic or East Pacific. Compared to the giant oceanic manta ray, the reef manta ray tends to be found in shallower, more coastal habitats, but local migrations are sometimes reported. Manta birostris is similar in appearance to Manta alfredi and the two species may be confused as their distribution overlaps. However there are distinguishing features.

Manta Rays can be identified individually by the spots on their belly. No 2 Manta Rays will have the same spot patterns, making that their 'fingerprint'. Manta Rays are filter feeders, meaning they swim with their mouth wide open and using their lobes to channel water rich with planktons into their mouth and it passes through their gills. There are plates along the gills that trap the food inside of the mouth so that only the water passes back out. Despite their size, Manta Rays are harmless to human. They no longer has the stinging spine on their tail, unlike the smaller species of Sting Rays, which can be venomous.

Yes, @armadeus.4
I have swim and dive with them many times, but each time, its still the amazing feeling and feeling awed by such a majestic animal :)

Amazing! What an incredible experience. Thank you for the information and thank you for sharing :)

Yes, @sunnyjosef.
It is not often that we encounter such huge animals and them being so friendly, which is why they are also fondly referred to as Gentle Giants :)

Wow!! Martin, what an experience to be with these huge, majestic beings!!!

Yes, @DrNamgyal.
It is a thrilling experience to see this majestic animals in the wild and to be given the opportunity to get close-up with them is truly memorable.

Wow, could have been quite a feeling to get a photo such as this!

Thanks, @Mark and yes, when they get to that size, they don't need the venomous barb/spine. However, the young ones, probably are born at less than 2 meters wing span can still be vulnerable to large predators like bigger Sharks or Orca Whales. I saw a documentary featuring Orca Whales hunting Eagle Rays, which is also a big species of Rays, and they still have the venomous barbs/spines, but it didn't help when they are up against the Orcas.