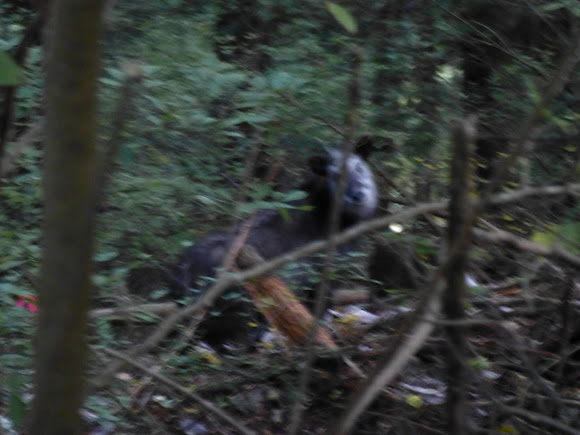 The Japanese serow (Capricornis crispus or Naemorhedus crispus), known in Japanese as the Nihon kamoshika (ニホンカモシカ?), is a goat-antelope found in dense woodland on Honshū, Japan. Japanese serow stand 60 to 90 centimetres at the shoulder and weigh 30 to 130 kilograms. Japanese serow are mottled brown and white and black underneath. Their fur is very bushy, especially their tails. Both sexes have short 10 centimetre horns, which curve backwards. Japanese serow are found in dense hillside forests where they eat leaves, and acorns. They are diurnal, feeding in the mornings and evenings and resting under rock ledges for the remainder of the day. The serow are solitary, or gather in couples, sometimes with kids as well. Generally they live in small ranges, around 20,000 square metres for individuals and up to 200,000 square metres for larger groups. Ranges are marked with a substance similar to vinegar that is secreted from the serow's preorbital gland, which is just in front of the eye. (This can be seen in the picture) They have lived up to 10 years in captivity. Lifespan in the wild is unknown. The captive population is around 35.

Information from the Wikipedia article on them. We saw this one while hiking in Japan. Our guide was very surprised as she had never seen one of these before and as they are apparently very shy. So lucky us! Apologies for the blurriness of the image- I'll try and find if we have a better one later.