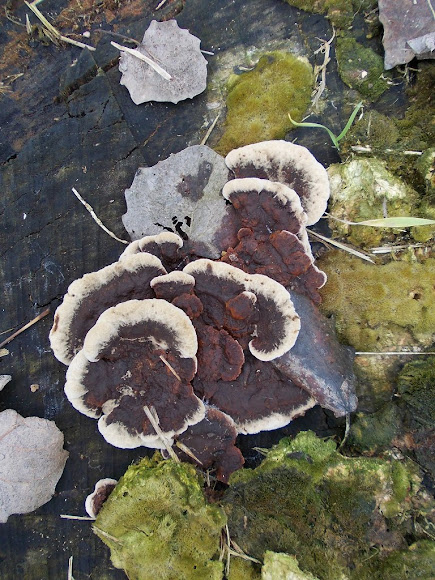 haeolus schweinitzii, commonly known as velvet-top fungus, dyer's polypore, or dyer's mazegill, is a fungal plant pathogen that causes butt rot on conifers such as Douglas-fir, spruce, fir, hemlock, pine, and larch. P. schweinitzii is a polypore, although unlike bracket fungi the fruiting body may appear terrestrial when growing from the roots or base of the host tree. The fruiting bodies, appearing in late summer or fall, commonly incorporate blades of grass, twigs, or fallen pine needles as they grow. As these fruiting bodies age, the pore surface turns from yellow to greenish yellow, the top becomes darker, and the flesh becomes harder and more wood-like. This specimen was spotted and photographed in a central city park of Larissa city, Greece.