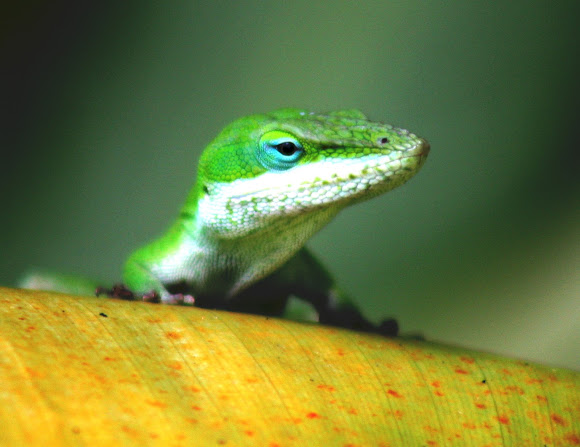 The Carolina anole (Anolis carolinensis) is an arboreal lizard found primarily in the southeastern United States and some Caribbean islands. Other common names include the green anole, American anole and red-throated anole. It is also sometimes referred to as the American chameleon due to its ability to change color from several brown hues to bright green. While many kinds of lizards are capable of changing color, anoles are closely related to iguanas[1] and are not true chameleons. The Carolina is a small lizard; male adults are usually 15 cm long in adulthood, about half of which is its tail, and it can weigh from 3–7 grams. Exceptionally, these anoles will grow up to 20 cm in length.

The species has been introduced into Hawaii and the Ogasawara Islands.

Thanks @Shirezu and no thanks to Wiki ;)

This isn't a gecko, it's a Carolina Anole which is an introduced species in Hawaii.