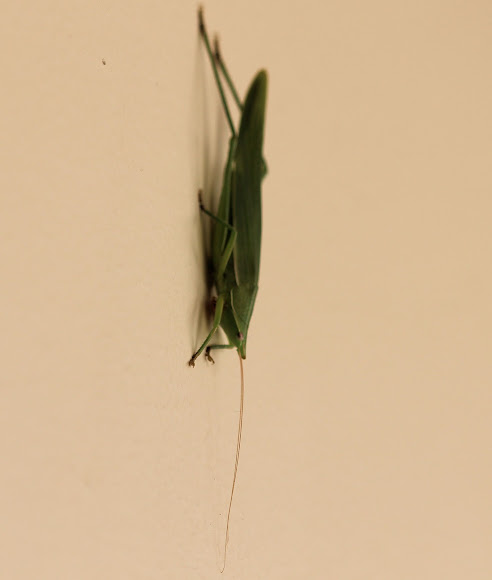 Just another katydid on the wall in the open-air building I live in.This one is about 5.9 cm long. The first two photos were taken with a macro lens. The last two were taken with a standard 35mm lens with a 2X lens attached. With this arrangement I can get within about an inch or an inch and a half of the subject. Nothing special about this one. He is sharing the wall with 2-3 geckos. He's been on the wall two nights now. The Geckos are very territorial, even among themselves. Last week we had three katydids on the wall at the same time. One of the geckos on the same wall went over to one of the katydids and bumped him with his nose and knocked the katydid off the wall. The katydid simply climbed back on the wall. The katydids aren't afraid of the geckos. They are too big for the geckos to eat. If the katydid had been about a foot lower on the wall, I could have gotten some stacked images of him where everything in the photos would have been clear.

Open-air building in an area with lots of gardens and plants.