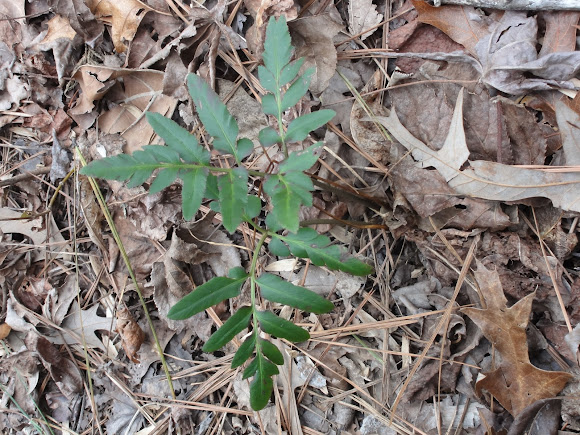 Moonworts are ferns, seedless vascular plants, of the genus Botrychium, sensu stricto. They are small, with fleshy roots, and reproduce by spores shed into the air. One part of the leaf, the trophophore, is sterile and fernlike; the other, the sporophore, is fertile and carries the clusters of sporangia or spore cases. Some species only occasionally emerge above ground and gain most of their nourishment from an association with mycorrhizal fungi. They are unusual among tracheophytes ("higher plants") in that at least some species produce the sugar trehalose. The circumscription of Botrychium is disputed between different authors; some botanists include the genera Botrypus and Sceptridium within Botrychium, while others treat them as distinct. The latter treatment is provisionally followed here.

Spotted in Kennesaw Mountain National Battlefield Park Thanks to drP for help with the ID! :)

Good idea - I think I will change to Botrychium sp. and keep an eye on this particular patch now that I've found it - and as it goes through its lifecycle, it will help clear up any doubts or point toward the other species. The georgia Native Plant Society lists two native other native grapeferns, and this could be one of those as well. :)

QWMom: Happy to help. I'll leave it up to you if you want to just call it Botrychium sp. Ferns can be maddening to ID sometimes.

Thanks so much! I was tearing my hair out as I could not find an exact match via pictures on line... there is a fairly decent website on Georgia ferns

I was kind of leaning toward Botrychium biternatum but I think you are right with Botrychium dissectum which is a more common species... thanks!

That's a grape fern, Botrychium sp. There are a couple of species that look an awful lot alike. Take a look at http://www.projectnoah.org/spottings/182... for example. If I can narrow it down, I'll post an update.