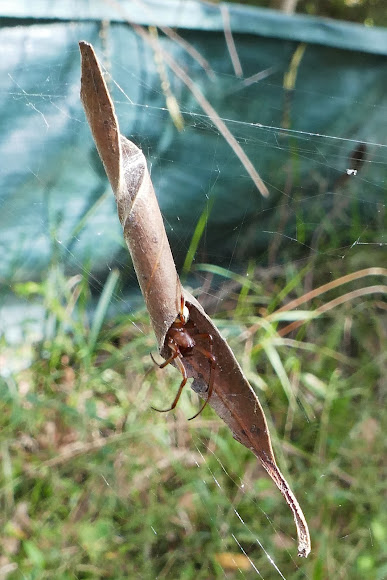 The "leaf curling spider" is an Australian native and a small member of the Araneidae family, the orb-weavers. The spider is distinguished by having a curled leaf at the centre of its web, in which it shelters, although it may use some other type of object like a snail shell or piece of paper instead. The species form pairs living together in the same leaf, though at opposite ends of their shelter, even before mating at maturity. This cohabitation may be a form of mate-guarding, because resident males challenge rival males that venture onto the web. He can still be eaten by the female though. The female also creates a separate curled leaf "nursery" hung in foliage nearby. (Wiki) PS: This is a shy species, but I have actually been bitten by one. It had set up shop behind the external mirror of a car which had been sitting idle for some time. A quick bite which stung, but I don't recall any adverse reaction. I recognise it from the photos.

Usually found in open woodland and forest habitats, as well as suburban gardens. This spotting was in a bush regeneration area in native bushland along Devlins Creek, in northwest Sydney. Native ferns, trees and shrubs were looking lush after recent rains.

Another local reference with excellent photos. One spider has even used a snail shell as a shelter - https://www.brisbaneinsects.com/brisbane... Not to be confused with another local species, the "leaf rolling spider" (Araneus dimidiatus) - http://www.brisbaneinsects.com/brisbane_... However, this is a smaller spider and it twists its leaf tighter. It is also less common than its "leaf curling" cousin.

Thanks, Tukup. I tried for some good macro shots but it was far too windy. Never mind. Nice to see you back.

Great shots and notes Neil. Thanks.

Fascinating creature. It looks like a grasping hand on the end of a sleeved coat.

Thanks Neil! Great little show. Spiders are so much fun to watch and figure out why and how they do what they do.

Thanks, Lauren. They can and do use both (1:50). Everything you want to know is right here: https://www.youtube.com/watch?v=voTUVw_Y... This is actually a great video, and I used to watch this show (Curiosity Show) when I was much younger. I cringe a bit now when I watch it, and if I was the spider I would have bitten the guy for destroying my home and for spitting in my web (3:20). Gotta love that dreadful 80's sweater :-)

Do they curl their leaves or use a dry already curled leaf?

Wow Neil, this is so cool. I never saw one of these before! I don't think we have any spiders that do that here. We have our garbage line spiders and one that builds a beautiful little silk haven at the corner of its web. The reference with the one that used a shell was incredible. I also wonder how it got that shell up to its web.