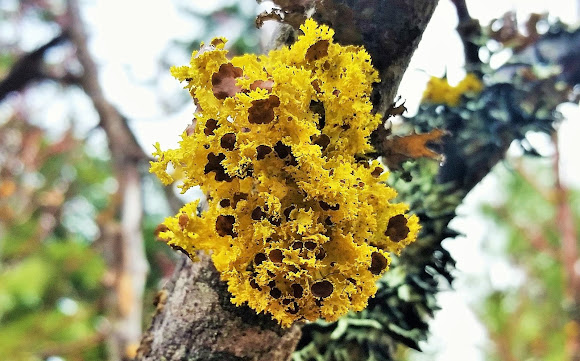 A loosely attached foliose lichen with erect lobes giving it a fruticose impression. The thallus surface is bright yellow. The apothecia is a contrasting dark brown 1 to 4 mm disc. Even though this is a fairly common lichen on the east side of the Cascades its one of the few times I've found it still attached to the tree. I usually find it on the ground after the wind has blown.

Spotted on a vine maple. Usually found on bark of conifers though sometimes on hardwoods like this one. Range is western North America from British Columbia to California.

The bright yellow color comes from pinastric and vulpinic acids - two substances only found in lichens that are believed to repel the insects and other wildlife that might eat it.