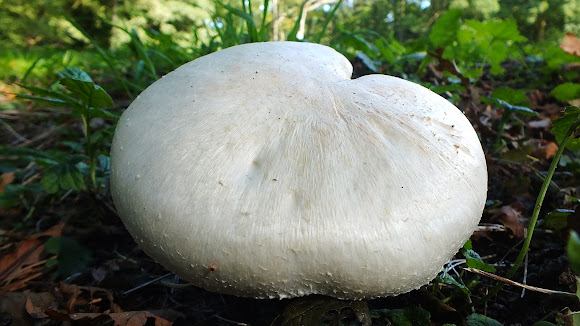 The cap of Agaricus arvensis matures at 8 to 20 cm diameter. White but yellowing gradually with age, smooth or finely scaly, the cap is initially spherical and expands until it is flat or nearly so. The thick flesh is white and firm. The cap turns yellowish where bruised, and old caps often take on a yellow-brown tinge. At first pale pink, darkening and then becoming brown, the gills of the horse mushroom are free and crowded. Up to 10 cm tall, the parallel stem usually a small bulb at its base and a robust, double ring with a cog-wheel form on the underside. The solid stem is smooth above the ring but sometimes finely scaly below. Its diameter ranges from 2 to 3 cm.

Agaricus arvensis appears in manured meadows and beside bridle paths and other places where there is plenty of decaying organic matter, upon which it feeds saprophytically. The horse mushroom is one of the largest and most distinctive fungi in its genus, often forms fairy rings many metres in diameter in permanent pastures.

I'm not quite sure on this one. I think it's the horse mushroom (Agaricus arvensis), though the marco mushroom (Agaricus urinascens) is very similar. Suggestions are welcome. Spotted in Nieuwe Rande in rural area of Deventer, Holland.