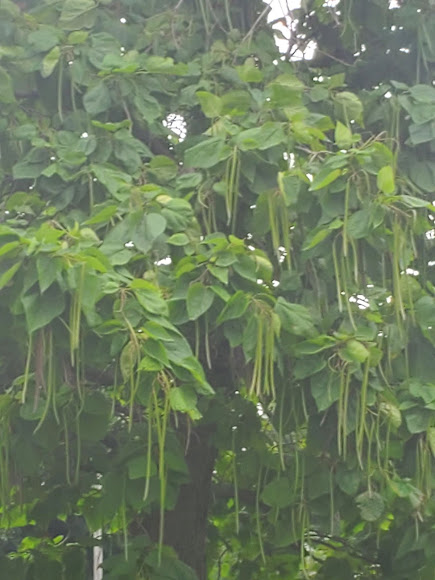 A spotting of a fruiting northern catalpa. Growing up my Dad used to say these where the trees string beans came from and honestly I can see it. Their seed pod is very legume like but actually hides a number of two winged seeds. Catalpas maintain their seed pods through winter but are the last trees to regrow their leaves, interestingly enough. Widely planted as an ornamental, this tree isn't as popular in the lumber world as you would think. It has very soft wood with a fine grain and is great for woodcarving and boats. The catalpa is popular among fishing enthusiasts due to the fact that it is parasitized by the catalpa sphinx caterpillar, which is considered amazing fishing bait. I actually have a spotting for the catalpa sphinx if you'd like more information on them. Other common names for the northern catalpa include the cigar tree and the bois chavenon, and I'm not sure why considering bois means wood and the Chavenon is a river in France. It is found on the confluence of the Mississippi and Ohio rivers in its native range though so maybe that's why.

Native to the Midwest but is widely planted elsewhere as an ornamental tree.