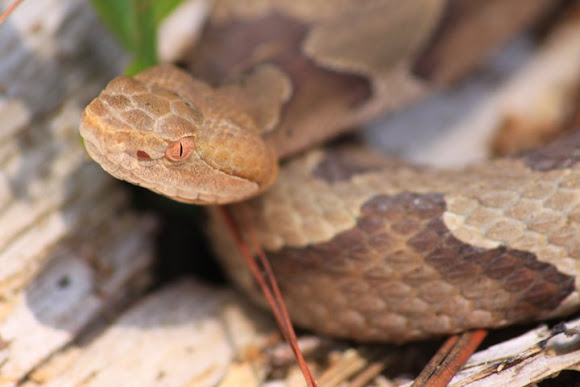 Adults usually grow to a total length of 50–95 cm (20–37 in), although some may exceed 1 m (3.3 ft). Males are usually larger than females. The maximum length reported for this species is 134.6 cm (53.0 in) for A. c. mokasen (Ditmars, 1931). Brimley (1944) mentions a specimen of A. c. mokasen from Chapel Hill, North Carolina, that was "four feet, six inches" (137.2 cm), but this may have been an approximation. The maximum length for A. c. contortrix is 132.1 cm (52.0 in) (Conant, 1958).[3] The body is relatively stout and the head is broad and distinct from the neck. Because the snout slopes down and back, it appears less blunt than that of the cottonmouth, A. piscivorus. Consequently, the top of the head extends further forward than the mouth.[4] The scalation includes 21–25 (usually 23) rows of dorsal scales at midbody, 138–157 ventral scales in both sexes and 38–62/37–57 subcaudal scales in males/females. The subcaudals are usually single, but the percentage thereof decreases clinally from the northeast, where about 80% are undivided, to the southwest of the geographic range where as little as 50% may be undivided. On the head there are usually 9 large symmetrical plates, 6–10 (usually 8) supralabial scales and 8–13 (usually 10) sublabial scales.[3] The color pattern consists of a pale tan to pinkish tan ground color that becomes darker towards the midline, overlaid with a series of 10–18 (13.4) crossbands. Characteristically, both the ground color and crossband pattern are pale in A. c. contortrix. These crossbands are light tan to pinkish tan to pale brown in the center, but darker towards the edges. They are about 2 scales wide or less at the midline of the back, but expand to a width of 6–10 scales on the sides of the body. They do not extend down to the ventral scales. Often, the crossbands are divided at the midline and alternate on either side of the body, with some individuals even having more half bands than complete ones. A series of dark brown spots is also present on the flanks, next to the belly, and are largest and darkest in the spaces between the crossbands. The belly is the same color as the ground color, but may be a little whitish in part. At the base of the tail there are 1–3 (usually 2) brown crossbands followed by a gray area. In juveniles, the pattern on the tail is more distinct: 7–9 crossbands are visible, while the tip is yellow. On the head, the crown is usually unmarked, except for a pair of small dark spots, one near the midline of each parietal scale. A faint postocular stripe is also present; diffuse above and bordered below by a narrow brown edge.

Within its range it occupies a variety of different habitats. In most of North America it favors deciduous forest and mixed woodlands. It is often associated with rock outcroppings and ledges, but is also found in low-lying swampy regions. During the winter it hibernates in dens, in limestone crevices, often together with Timber Rattlesnakes and Black Rat Snakes. In the states around the Gulf of Mexico, however, this species is also found in coniferous forest. In the Chihuahuan Desert of west Texas and northern Mexico, it occurs in riparian habitats, usually near permanent or semipermanent water and sometimes in dry arroyos (brooks)

Great pics! However I don't think it looks like a pure mokasen. I think it might be an intergrade with a southern and northern. :) also considering this is in NC it probably isn't a Mokasen