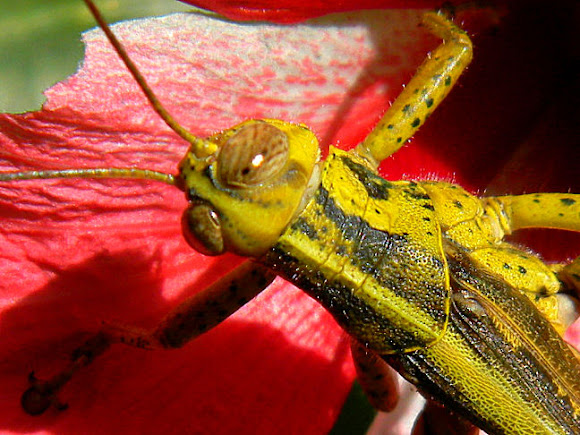 "The genus Valanga is probably undergoing a period of rapid evolution and shows considerable adaptability. Some 18 subspecies of Valanga nigricornis have been recognised.It is found in forest clearings and shrub thickets, feeding mainly on trees. The adult is a yellowish-brown, or yellowish or greenish with blue-black markings; the hindwings are a deep rose colour. Both hoppers and adults like sunlight and seek out sunny areas for basking, either at the top of vegetation or on open sites. Most feeding is done during the daytime. There are no records of gregarious behaviour. Most damage done by Valanga occurs when numbers increase locally. There are no records of invading swarms and large-scale movements. Local population increases appear to be related to rainfall. Heavy rainfall causes high mortality in both eggs and hoppers but dry periods allow numbers to increase. [An] outbreak in 1915 in the teak forests of Java was thought to have followed three seasons of below average rainfall and synchronisation of breeding. Elsewhere outbreaks are thought to have arisen when forest areas were cleared for cultivation." http://www.greenstone.org/greenstone3/nz...

Spotted on Hibiscus sp. in a large semi-urban yard & garden situated next to a disturbed patch of remnant forest. This is in the equatorial tropics of northern New Guinea.