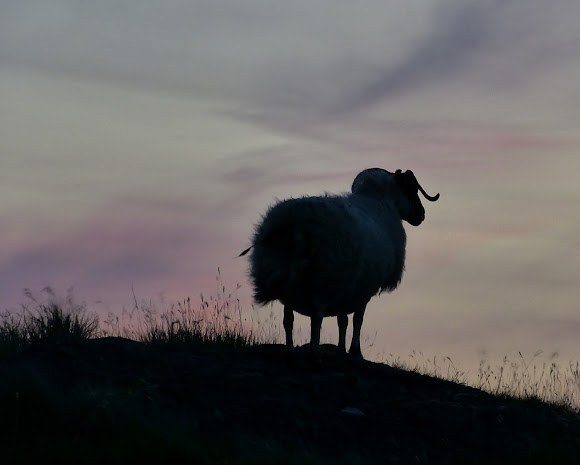 The Blackface epitomises the mountain sheep. They have long coarse wool that shields them from moisture and biting winds. Blackfaces are horned in both sexes, and as their name suggests, they usually have a black face (but sometimes with white markings), and black legs. Wikipedia

The Scottish Blackface is the most common breed of domestic sheep in the United Kingdom. This tough and adaptable breed is often found in the more exposed locations, such as the Scottish Highlands or roaming on the moors of Dartmoor. Wikipedia

Wow great set up what did you take this picture with?

Welcome to Project Noah BecciSenior
Nice first spotting,congrats and thanks for sharing
We hope you like the site as much we do; there are many features you can explore:
We invite you to go to http://www.projectnoah.org/faq where you will find the purpose and “rules” of Project Noah.
There is a blog http://blog.projectnoah.org/ where we post articles from spotters with special insight into different organisms.
Look at the global and local missions to put your spottings into: http://www.projectnoah.org/missions
Enjoy yourself,see you arround :)