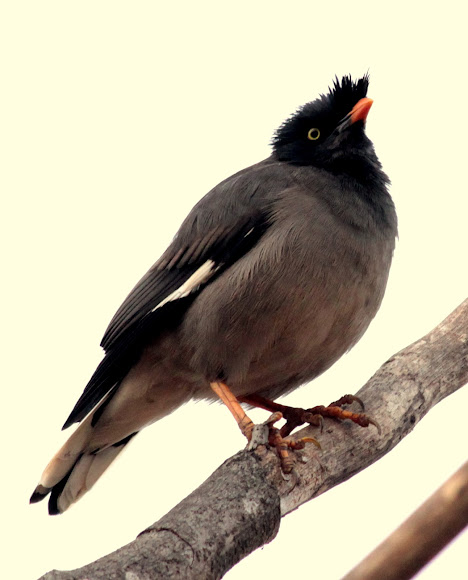 The Common Myna is a common resident breeder in tropical southern Asia from Bangladesh, Pakistan, India and Burma east to Indonesia. Habitat

This common passerine is typically found in forest and cultivation. The Jungle Myna builds a nest in hole. The normal clutch is 3-6 eggs.

These 23 cm long birds have grey plumage, darker on the head and wings. There are large white wing patches obvious in flight, and a white tail tip. The head has a forehead tuft. The bill and strong legs are bright yellow, and there is no bare skin around eye. The sexes are similar, but juveniles are browner. They are usually found close to water or rice fields. The southern Indian race has a blue iris. Like most starlings, the Jungle Myna is fairly omnivorous, eating fruit, grain and insects. In many parts of Asia, they are kept as pets. As a result, escaped birds have formed feral populations in many countries such as Taiwan.

Welcome to Project Noah !
your first spotting is also not a common Myna ...its a Jungle myna...Acridotheres fuscus. :)

Nice Capture Yogesh, in the 2nd pic its Brahminy Myna (Sturnia pagodarum), you can share it as an other spotting,,