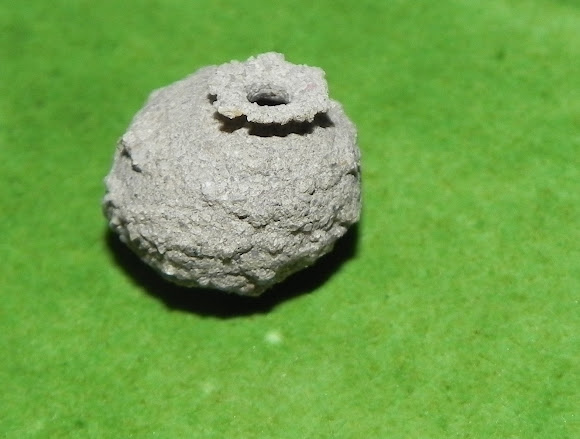 The nest may have one to multiple individual brood cells. The most widely used building material is mud made of a mixture of earth and regurgitated water, but many species use chewed plant material, instead. The name "potter wasp" derives from the shape of the mud nests built by species of Eumenes and similar genera. It is believed that Native Americans based their pottery designs upon the form of local potter wasp nests. When a cell is completed, the adult wasp typically collects beetle larvae, spiders, or caterpillars and, paralyzing them, places them in the cell to serve as food for a single wasp larva. As a normal rule, the adult wasp lays a single egg in the empty cell before provisioning it. Some species lay the egg in the opening of the cell, suspended from a thread of dried fluid. When the wasp larva hatches, it drops and starts to feed upon the supplied prey for a few weeks before pupating. The complete life cycle may last from a few weeks to more than a year from the egg until the adult emerges.

The different species may either use existing cavities (such as beetle tunnels in wood, abandoned nests of other Hymenoptera, or even man-made holes like old nail holes and even screw shafts on electronic devices) that they modify in several degrees, or they construct their own either underground or exposed nests

Thank you BugEric for your comment. I've seen several of these nest but haven't watched them enough to know anything about them-thanks for the information-appreciate you!

Ava T-B Thank you for your help and I did add to your suggested mission-appreciate you!

Thank you Reza Hashemizadeh-I wasn't sure which category to place it in! Appreciate your help!

Nest is unfinished: Entrance hole is still open. Only one caterpillar provisioned so far. The mother wasp was still out looking for more caterpillars to put in the nest. It is possible that she herself was killed, and therefore her larval offspring will not reach maturity on just one caterpillar.

Moved to Arthropods for you.

Wonderful spotting Melissa, it should however be in the Arthropod category, since the nest/home was made by one :)