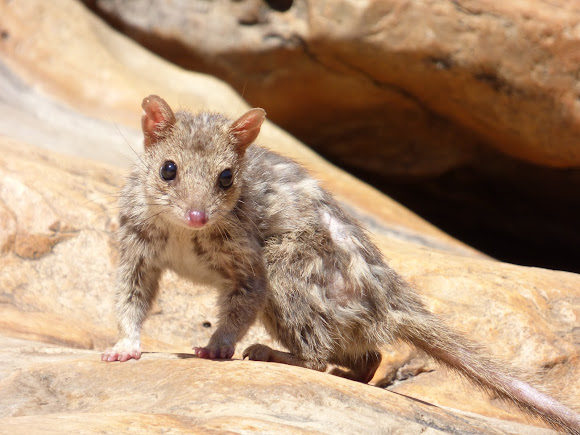 The Northern Quoll is listed as Endangered on the IUCN redlist. The Northern Quoll is a small marsupial - the smallest of the four species of Quolls. Females have eight teats in a pouch, but apparently give birth to more than eight young which must wriggle their way to the pouch and compete for a teat to survive - Wiki A remarkable feature of this species is that the males show complete die-off after mating, leaving the females to raise the young alone. - Wiki The Northern Quoll’s short life-span and annual male ‘die-off’ makes populations vulnerable to extinction from high-impact threats such as those posed by the initial invasion of large numbers of cane toads into an area. Nevertheless, some populations – such as that on Brooklyn - have persisted for decades after invasion by cane toads. It is possible that surviving quolls may have learnt not to eat toads. - AWC (http://www.australianwildlife.org/wildli...) Cane toads have already reached Gibb River Station which is to the east of Bell Gorge where this little one was spotted during the day.

Thank you Neil. That means a lot :) Even all this time later it still is one of my favourite and luckiest shots.

A popular spotting, and rightly so. Quolls are amazing animals. Thanks for sharing, Liana, and congratulations.

Thank you for all of your wonderful support and kind words Leanne and Christiane!!!

WOW.... Great News.. Love the Quolls... Just hope we can see them for many more years and not just in the zoos.. Congratulation!

Fantastic! Congratulations armadeus! A well deserved recognition for a great series. Let's hope we can see these guys for many years to come. Well done.

Thank you for all of your wonderful support Daniele, Triggs, and Mark!

Thank you Ashley and PN Rangers for choosing this little Quoll. It is a pleasure to share wildlife from the Kimberley - especially those critters that are threatened. It is an honor to have been selected especially given the quality and variety of everyone else's spottings. Big congratulations to everybody!

Well dome armadeus! This is a fantastic outcome for a very special species and high quality images.

Well done armadeus. Great spotting and great result! Agree with Mark, this species and it's plight needs all the publicity it can get. Congrats again. Well deserved.

Congrats armadeus, your inquisitive Northern Quoll placed 1st in the mammal category for the Best of 2015! Here is the link for the '2016 Best Wildlife Photo' mission so you can add more fantastic spottings for this year! www.projectnoah.org/missions/2004046002

This is such a great series of this gorgeous quoll armadeus! Wishing you all the best in the competition!

Congrats armadeus.4, your inquisitive Northern Quoll has made the top 10 mammal spottings in the '2015 Best Wildlife Photo' mission! Rangers are voting on the top 10 mammal spottings, and the top 3 will be announced on February 6th. The top 3 spottings will be commented on here on the site, but make sure you keep a look out on our Facebook app page for the announcement as well! Congratulations on making the top 10! https://www.facebook.com/projectnoah

I have been all around Australia and lived there for a couple of years too - Queensland and Victoria. I have seen platypuses often and a tree kangaroo amongst my highlights. I have been to most corners of Australia and seen Lake Eyre in flood. I did try and emigrate there but without success.

I'm sorry to hear that Les. I hope your previous trip/s treated you kindly!

I have not been back to Australia for many years and suspect I may not return.

I will keep my fingers crossed for you Les!!!

One I'd love to see.

Thank you! I was planning on exploring more of the gorge and as I started off there was this little Quoll charging round the area that us humans hang about in - looking for food! One of the last shots before my camera went for a swim...lucky I got these shots! :)