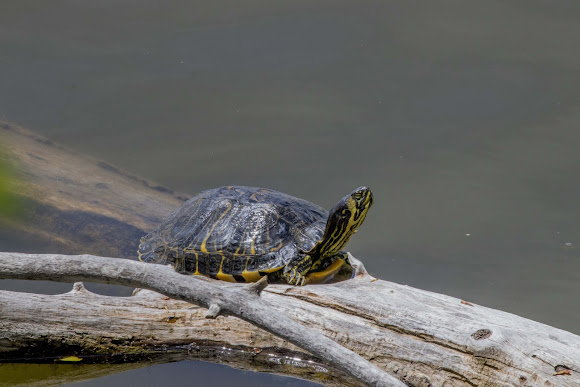 range from 27 and 39 mm in length, and weigh from 5.2 to 14g. When newly hatched, these turtles are a bright green color with light markings. As they mature, their makings tend to darken. At maturity, shell lengths as long as 43.7 cm have been observed, and turtles can with weigh up to approximately 5 kg. Overall, the shells of adult turtles are relatively flattened, elongated, and oval-shaped with light and dark brown markings. Each shell is distinctively different, but most include green, yellow, brown, and black patterns. Sexual dimorphism can be seen in these turtles, with adult females being larger on average (average carapace length of 287 mm) than adult males (average carapace length 223 mm). Additionally, the shells of male river cooters are flatter than that of females. Males also possess elongated fore claws as compared to females.

Are primarily found in permanent bodies of freshwater such as rivers and lakes. On rare occasions, these turtles also can be found in ponds, springs, swamps, and even saltwater tributaries. The habitats of these turtles are laden with various types of aquatic plants and marine flora. Though shallow in nature (0-2 meters), these habitats often are moderately inaccessible to humans in order to protect the turtles from anthropogenic disturbances and predation attempts. River cooter turtles also spend part of their lives on land. Activities such as basking and nesting typically take place in terrestrial environments within 30 meters of the waters in which these turtles spend the majority of their time