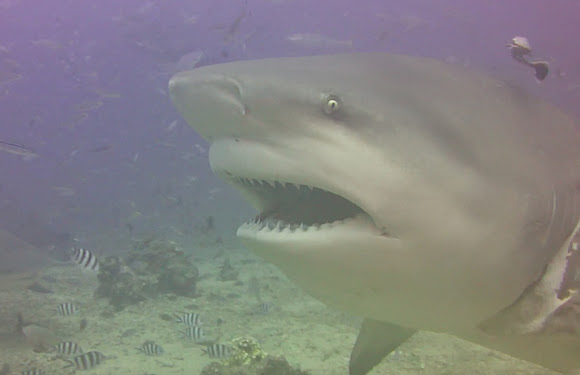 The bull shark (Carcharhinus leucas), also known as the Zambezi shark or, unofficially, as Zambi in Africa and Nicaragua shark in Nicaragua, is a requiem shark. This close encounters with the Bull Sharks is conducted by a Dive Operator doing the chumming/feeding of Sharks. Usually, during the dive, as many as 15-20 Bull Sharks can be seen. The Shark feeding program started in Fiji around 15 years ago at an authorised dive spot which was allocated by local villages. That dive spot at that time was barren with hardly any corals and fish. Since the Shark feeding program started, up to 400 species of reef fishes can be seen in the location with hundreds of species of corals. Sharks in general, is a top predator and they keep a healthy balance in marine life. Although Sharks have been portrayed as vicious animal that hunt/bite/eat others, including human, this is not the case. Most attacks on humans are by mistake.

They are commonly found worldwide in warm, shallow waters along coasts and in rivers. The bull shark is known for its aggressive nature, predilection for warm shallow water, and presence in brackish and freshwater systems including estuaries and rivers.

Yes, @Jellis, all the footages are mine.
I have changed the picture to without the Keynote word, which I wrongly inserted when editing and downsizing the pictures. Internet is still very slow in Fiji.

Great spotting Albert. Thanks for sharing. :)

did you take these yourself? I noticed the word KEYNOTE on the first image which does not look right

Great capture Albert,congrats and thanks for sharing

Unbelievable. It seems counter-intuitive that a top predator being reintroduced can have such an impact. Thank you for sharing all of this information!

Thanks, @armadeus.4
The bigger Sharks, being top Predators are very important to the overall being of marine life.

This is the same situation as the Grey Wolf in US which was reintroduced into the Greater Yellowstone Ecosystem in 1995, there was only one beaver colony in the park, said Doug Smith, a wildlife biologist in charge of the Yellowstone Wolf Project.

Today, the park is home to nine beaver colonies, with the promise of more to come, as the reintroduction of wolves continues to astonish biologists with a ripple of direct and indirect consequences throughout the ecosystem. The presence of wolves triggered a still-unfolding cascade effect among animals and plants-one that will take decades of research to understand.

Wow! This just goes to show the importance of protecting our apex predators and the ecosystems they support. Thank you so much for sharing this great series and information Albert! I hope you are enjoying Fiji. Where are you staying?