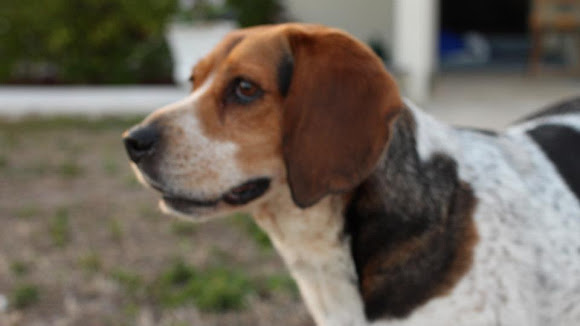 This is Briza, a rescued beagle and the best friend with 4 legs I could ever ask for. Briza and I have been together for about 4 years. I have no idea how old she is but she will always be my baby.

In 2012 Briza got lost in the forest behind my home. Like most beagles, she follows her nose without paying attention and get pretty far. I came home from work one day to the horrifying news that Briza had got out and did not come back. Briza knows the local dog catcher very well. But even he had not seen her. It was the saddest 4 days of my life. I would go to the door and call out for her. We canvased the neighborhood hanging signs daily. Each day we hung signs further out thinking that she might be traveling in the wrong direction. My wife thought for sure the coyotes had got her. Four days later I was printing out more flyers for another trip when I heard a squeak from the back yard. I could swear, like many other times in the past 4 days that I could hear her. Almost like a phantom sound. I decided that I would not go inspect as my emotions were just playing tricks on me. But then another sound, and my wife looked at me, she had heard it as well. I jumped up and went to see outside and there she was. Tired and filthy but home. If only she could tell me of her journey! She vocalized a cry out when she saw me and I dropped down to hold her. Her joints were swollen and her pads were chapped, she must have traveled so far! I could tell by her bathroom time that she had been surviving on a diet of berries and other vegetation (sure enough she eats berries right off the bushes now in season). I am so happy she came back to me, and so impressed by her survival skills. She had lived out in the 4300 acre state forest behind my home for 4 days.