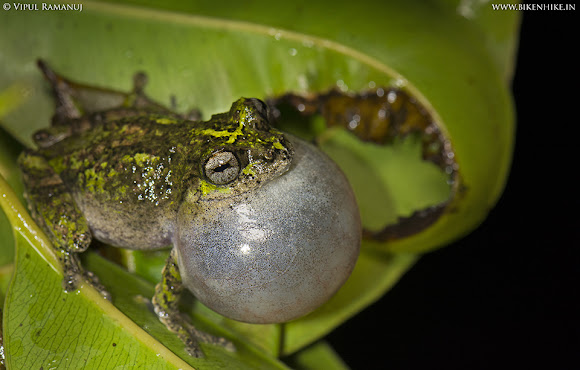 One rarity that only calls from high tree canopies, calls that echo exactly like a water drop. Since they never come down from the canopies, it was extremely difficult to photograph this while balancing high on a tree branch with a torch and camera. The gushing wind and lashing rains added another difficulty level. Got a video and this shot after almost two hours. Happy with the outcome after all that was put at stake. Here's the link to the video: https://www.youtube.com/watch?v=FBlowBV9...

Lovely image. Thank you for sharing it.

Great spotting! Congrats and thanks for sharing!

Congratulations!!! When I saw you were nominated I really wanted you to be chosen!

Congrats Vipul, this beautiful frog has been chosen as our ranger's choice Spotting of the Week!

Thank you so much Rangers :)

Welcome to Project Noah Vipul Ramanuj
Nice first spotting,congrats and thanks for sharing
We hope you like the site as much we do; there are many features you can explore:
We invite you to go to http://www.projectnoah.org/faq where you will find the purpose and “rules” of Project Noah.
There is a blog http://blog.projectnoah.org/ where we post articles from spotters with special insight into different organisms.
Look at the global and local missions to put your spottings into: http://www.projectnoah.org/missions
Enjoy yourself,see you arround :)