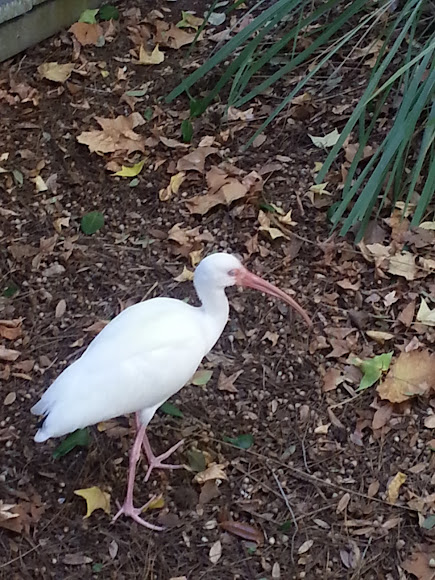 a white bird with a long beak, the bird is about medium sized. it was walking around eating bugs. this bird has little physical variation and has a very little variation over most of the white ibis population. it looks almost identical to a scarlet ibises. they breed sexual along the east coast and gulf of mexico. The American white ibis pairs up in spring and breeds in huge colonies, often with other water-bird species(mutual ism). Nesting begins as soon as suitable nesting habitat is available. its long legs allow it to walk in the marshes of its habitat.

disney world :animal kingdom in a tropical environment with wood chips and palm trees it was semi wild. when not in captivity the striking White Ibis is frequently seen on lawns looking for large insects as well as probing for prey along the shorelines of the deep south and central america. the white ibis is prone to over 50 species of parasites.

The White Ibis is abundant in Florida, especially in coastal areas.