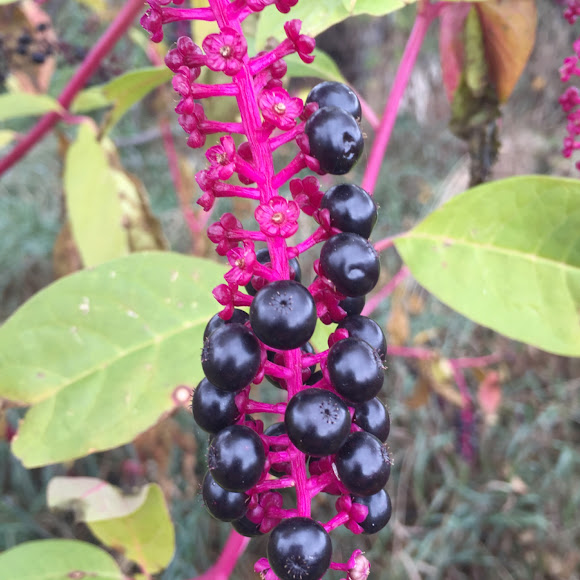 American pokeweed (Phytolacca americana), or simply pokeweed, is a herbaceous perennial plant in the pokeweed family Phytolaccaceae growing up to 8 feet (2 meters) in height. It is native to the eastern United States and has significant toxicity. It has simple leaves on green to purplish stemsand a large white taproot. The flowers are green to white, followed by purple to almost black berries which are a food source for songbirds such as gray catbird, northern mockingbird, northern cardinal, and brown thrasher, as well as other birds and some small animals (i.e., to species that are unaffected by its human toxins). P. americana or pokeweed—also known by a number of other names—is native to eastern North America, the Midwest, and the Gulf Coast, with more scattered populations in the far West.[not verified in body] It is considered a major pest species by farmers,[not verified in body] and that and the danger of human poisoning—its significant toxicity and its risks to human and animal health are consistently reported, with the whole of the plant toxic and increasing in toxicity through the year, with children at particular risk of its very poisonous purple-red[clarification needed] ripe fruit—support arguments for eradication of P. americana. Even so, it is used as an ornamental in horticulture, and it provokes interest for the variety of its natural products (toxins and other classes), for its ecological role, its historical role in traditional medicine, and for some utility in biomedical research (e.g., in studies of pokeweed mitogen). In the wild, it is easily found growing in pastures, recently cleared areas, and woodlandopenings, edge habitats such as along fencerows, and in waste places.

Poisonous Do Not Eat Do Not Touch

Welcome to Project Noah Cobalt Blues
Nice first spotting,congrats and thanks for sharing
We hope you like the site as much we do; there are many features you can explore:
We invite you to go to http://www.projectnoah.org/faq where you will find the purpose and “rules” of Project Noah.
There is a blog http://blog.projectnoah.org/ where we post articles from spotters with special insight into different organisms.
Look at the global and local missions to put your spottings into: http://www.projectnoah.org/missions
Enjoy yourself,see you arround :)