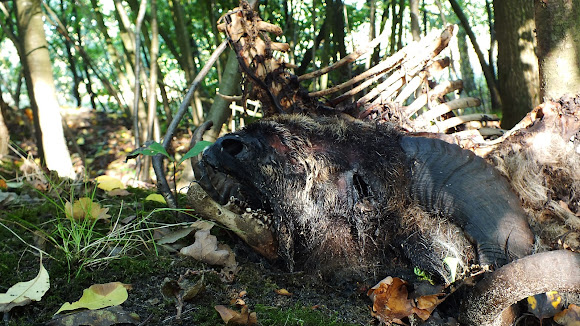 The Drenthe heath sheep is the oldest Dutch native sheep breed. Named after the province of Drenthe in the Netherlands, because it was there that they were found most. Drenthe is a province that still harbours the largest heath fields and as the farming land was poor, so the Drenthen farmers had to have a sheep that could survive the harsh winters on little extra food. Selection occurred mostly in a natural way. The most hardened sheep survived, just like it happens with animals living in the wild. Those sheep needed endurance, because they had to roam the heath fields for hours and hours to get their bellies full. Sheep do have a natural wool fat, called lanoline which protect them from getting soaking wet to their skin when it's raining.

Domesticated breed of sheep grazing on heathland in a national park.

Yeah it caught me off guard, here I thought I was following the scent of a stinkhorn.

Haven't heard of those.. thanks. Doesn't look too happy.