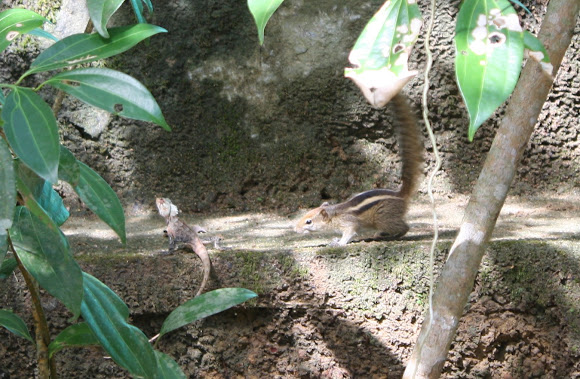 Also known as the Three-striped Palm Squirrel, the size of a chipmunk, and even though wikipedia states that the tail is slightly shorter than the body in India, the Sri Lankan ones seems to have tails that are just as long as their bodies, if not slightly longer. It's got three white and four black stripes on its back, the body is brown and the tail is a mix of white, brown and black hairs. Concervation status by IUCN of this species is Least Concern. https://www.iucnredlist.org/species/8701...

This one was spotted trying to interact with several species of birds, got these photos of it interacting with an adult male Oriental Lizard(Calotes versicolor), which wasn't very fond of the company. They are in general very playful and energetic and are excellent climbers, often seen jumping from branches of one tree to another with very little effort. Just as easily can run up a tree as running down it head first.