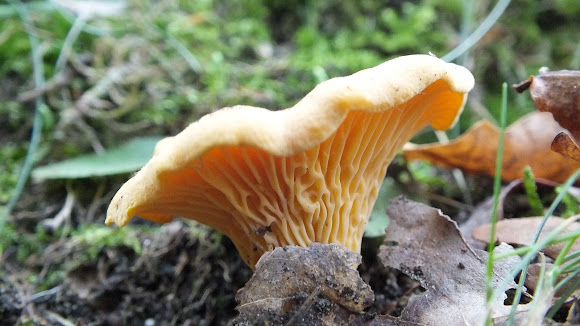 The usually funnel-shaped cap, of diameter up to 10cm, has a wavy irregular margin. Colour varies from light yellow to deep egg-yolk yellow, but sometimes a fine white bloom masks the background colour. Not strictly gills at all, the wrinkled veins on the underside of the cap distinguish the chanterelle from lookalikes such as Hygrophoropsis aurantiaca, the false chanterelle. The veins are very thick and decurrent, extending well down the stem. They are straight near to the stem but forked and more sinuous towards the edge of the cap. The stem of Cantharellus cibarius is the same colour as or somewhat paler than the cap, often no more than 2 cm long and merging into the cap. When growing in clumps, as is often the case, the stems of chanterelles are often curved and occasionally joined together near the base.

This ectomycorrhizal species is most frequently found in deciduous forests with oak, chestnut or hazel, but chanterelles also occur under conifers and occasionally on roadside verges beneath deciduous hedgerows. Chanterelles show a preference for acid soils.

These are so delicious.