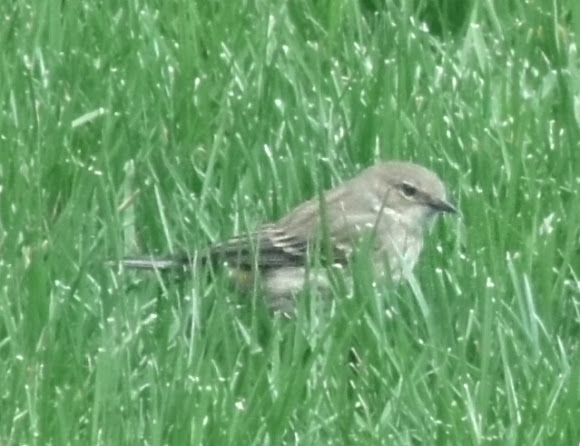 Yellow-rumped Warblers are fairly large, full-bodied warblers with a large head, sturdy bill, and long, narrow tail. In summer, both sexes are a smart gray with flashes of white in the wings and yellow on the face, sides, and rump. Males are very strikingly shaded; females are duller and may show some brown. Winter birds are paler brown, with bright yellow rump and usually some yellow on the sides.

The Yellow-rumped Warbler breeds from eastern North America west to the Pacific, and southward from there into Western Mexico. "Goldman's" Yellow-rumped Warbler is endemic to the highlands of Guatemala. The Myrtle and Audubon's forms are migratory, traveling to the southern U.S., Mexico, Central America, and the Caribbean for winters. Among warblers it is one of the last to leave North America in the fall, and among the first to return. It is an occasional vagrant to the British Isles and Iceland. Yellow-rumped Warblers spend the breeding season in mature coniferous and mixed coniferous-deciduous woodlands (such as in patches of aspen, birch, or willow). In the western U.S. and in the central Appalachian Mountains, they are found mostly in mountainous areas.

Spotted through my office window at work

Thanks so much! I got a much better picture later in the day when one was brave enough to hop up on the bushes right next to my window!

That would be a Yellow Rumped warbler, nonbreeding