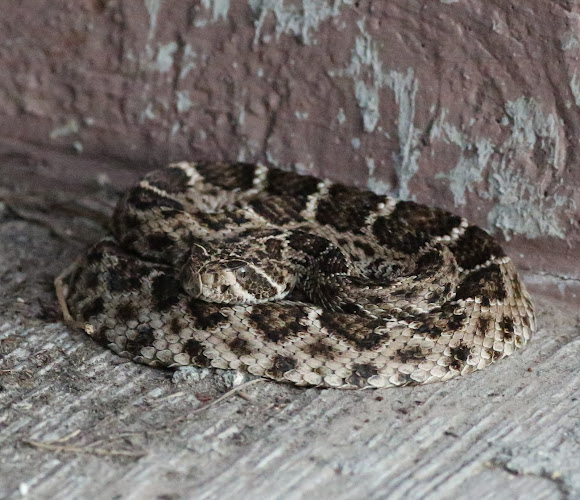 Heavy-bodied black, tan, and white snake with diamond patterns along its back. Venomous. Wish I could have gotten a pick of the rattles but I didn't want to "rattle" him. (Lame excuse for play on words but couldn't help it.) Adults commonly grow to 120 cm (4 ft) in length. Specimens over 150 cm (5 ft) are infrequently encountered, while those over 180 cm (6 ft) are very rare. The maximum reported length considered to be reliable is 213 cm (7 ft). Males become much larger than females, although this difference in size does not occur until after they have reached sexual maturity. Rattlesnakes of this species considered medium-sized weighed 1.8 to 2.7 kg (4 to 6 lb), while very large specimens can reportedly weigh up to 6.7 kg (15 lb). (Wiki)

Found in the United States and Mexico. I found this one right outside the women's restroom at the Aransas National Wildlife Refuge located on the gulf coast of Texas. (I decided I could wait.) The habitat is described on most sites as being wooded areas and rocky areas. They blend in very well with rotting cactus by the way. However, they have been known to slip into picnic baskets and other objects. The one pictured was right out in the open on concrete which made it easy to avoid.

I'm reading that they are rarely seen but I've seen two this year. They may be rarely seen but apparently they are often felt because we are constantly running out of anti-venom in San Antonio. On average, 1 to 2 people in Texas die each year from venomous snake bites. Interesting: I read roughly half of all venomous snake bites are "dry." That is, the snake does not inject venom into the victim. Is this true?